“Siberia: it fills one twelfth of the land-mass of the whole Earth,
yet this is all it leaves for certain in the mind. A bleak beauty,
and an indelible fear.”  -  Colin Thubron

Five million square miles - that's Siberia. To compare - Canada's land area is 3,850,000 square miles while The British Isles is only 100,000 square miles. Yes, Siberia is big, very big. However, until this month arrived, what I knew about Siberia could have been written on the back of a small envelope.

Sorting through book donations at the Oxfam shop where I work every Wednesday, I spotted a book called "In Siberia" by Colin Thubron and decided to buy it. Though I shall never visit Siberia, at least Colin Thubron could give me a vicarious sense of the region through the eyes of an inquisitive travel writer.

Just inside the front cover, there's a map of Siberia that shows Thubron's itinerary. Mostly, he skirted the region's southern underbelly - travelling from The Urals parallel to Kazakhstan, Mongolia and eastern China. But there are vast swathes of land on the map where he didn't venture. Perhaps these areas are uninhabited wildernesses without roads, landing strips or paths. I don't know. 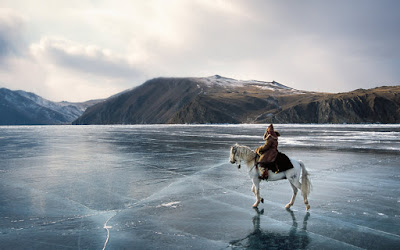 He visited Omsk and the vast inland sea that is Lake Baikal and he visited cold, godforsaken places such as Yakutsk, Norilsk and Magadan. Along the way, Thubron met many people who related their memories and observations. He saw nature's wild beauty and witnessed the ruins of Soviet expansionism - abandoned mines, crumbling prisons, empty schools, lost people. Of course it helped that Thubron is quite fluent in the Russian language. Though there are other indigenous languages in Siberia, Russian became the lingua franca over a hundred years ago as the Russian state sought to spread its wings.

I think I will draw this blogpost to a halt very soon. Is there anything more boring than somebody summarising a book you haven't read or a film you haven't seen in tedious detail?

Let me just say that Colin Thubron is an accomplished writer with an enquiring mind. He likes to get under the skin of a place and he has always displayed a passion for Asia. Sometimes we might forget that the Asian continent  isn't just India, China, Indonesia and other neighbouring exotic countries such as Thailand and Japan. It is also Siberia - vast, often brutally cold, rather empty and mysterious... even after you have finished reading the 286 pages of "In Siberia".
- August 22, 2016