In bygone times, disused English castles were commonly treated as stone quarries by local builders. There was no sentimentality or hesitation. They arrived with carts and hauled the stone away leaving tumbledown ruins behind them. Here in the city of Sheffield, we once had a large and significant castle. It stood on a bend of The River Don and played an important role in the history of northern England for four hundred years. But when it fell into disuse, almost all the castle's thousands of stone blocks were pilfered. Today, only the foundations remain to hint at once was.

Twenty miles north of Sheffield is the much smaller city of Wakefield. It was once the county town of The West Riding of Yorkshire and is rich in history. It had two strategically important castles. In the shadow of one of them, Sandal Castle, The Battle of Wakefield occurred on December 30th 1460, during the Wars of the Roses. 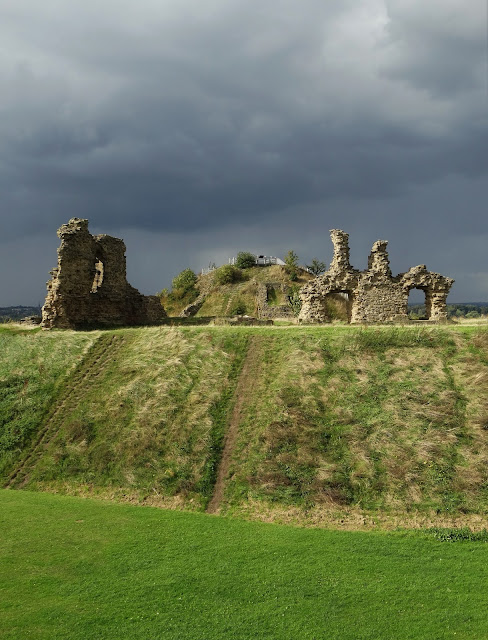 Twenty three years after that bloody battle, King Richard III decided that Sandal Castle would become his northern stronghold. He ordered many improvements to the castle that had by 1483 been in existence for over three hundred and fifty years. However, in 1485 Richard died at the Battle of Bosworth Field in Warwickshire so consequently his occupancy of Sandal Castle was short-lived.

A hundred and eighty years after Richard III's death, Sandal Castle was a Royalist base during the English Civil War and was besieged at least three times by Parliamentary forces. From that time onwards, the castle fell into disrepair and right up to the middle of the nineteenth century it was still being used as a convenient stone quarry by local people whose main objects in life did not include the preservation of historical buildings.

I am telling you all of this because I visited Sandal Castle yesterday. The text is just background to my photographs. You can see how little of the original construction remains - but enough to give an evocative sense of the location and what once was. You can almost hear the battle cries.
- October 02, 2016