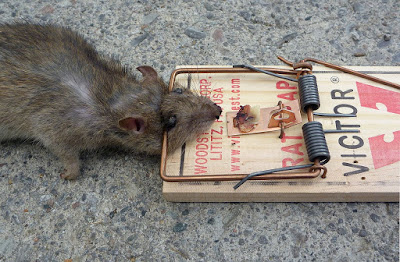 Tick tock...tick tock. For three nights, I had been sitting in the darkness. Waiting. Occasionally, I heard the wailing of ambulance sirens heading up to King's College Hospital. Just before three a.m. on the Sunday, I heard men's voices outside the bathroom window. But it was a false alarm.

By Monday night, I was beginning to think that my prey would never arrive. I was tired. And it was no fun sitting silently in my daughter's darkened flat in Camberwell. I couldn't watch television or surf the net, checking out faraway blogs. The screen light would be a give away. The night hours had passed so slowly. Tick tock...tick tock. This was going to be the last night. In the morning I would travel back to Sheffield.

I must have nodded off around midnight - descending into the dark well of sleep. Down down. To a place of memories and imaginings. But less than an hour later, I was sitting bolt upright. There was a noise at the entrance door. A faint noise. A rat scratching perhaps. The sound of a key in the lock.

This is what I had been waiting for and yet my heart began to pump so violently that it threatened to burst out of my rib cage. Conscious of  every breath I was taking, I stood up as quietly as a Native American scout and moved behind the door of the lounge. Waiting.

And not a moment too soon. The intruder was in the flat now. It was too late to change my mind or press "replay" on the DVD of my life. I could hear him moving quietly, cautiously, There was a pale beam from an electric torch or phone. He was in the kitchen. He was opening drawers. I heard him mutter, "Shit" and "Fuck" under his breath. What if he had a knife...or worse? A gun? It was too late now. No replay.

And then, almost before I knew it, he was stepping into the lounge. He was on the other side of the door, his torch beam on the far wall. He took another step forward and I saw his silhouette against the uncurtained window. This was my moment. Do or die.

The bedspread was over his head in an instant and he was down on the floor with a great harrumph. As I brought him down, like a sack of spuds, his head hit the edge of the mahogany coffee table. Though the wind was knocked out of him, muffled protests emerged from beneath the quilt. He was struggling like a sheep at shearing time but I was in charge. For good measure I gave his head a couple of solid punches and using unsavoury expletives demanded his silence as I reached up to the light switch.

Peeling back the bedspread, my quarry now came into view. No more than twenty with a suggestion of acne - either in recession or bubbling under. I couldn't tell. There was some sort of tattoo on the nape of his neck and I noticed a foul odour of tobacco smoke on his breath. His left eye socket was starting to swell.

He tried to buck me off but by now my knees were pressing hard into his shoulders. He was well and truly trapped. It's not easy to dislodge a seventeen and a half stone Yorkshireman who is intent on revenge.

"Wot you want? Wot you what?" he asked in his whining Thames estuary accent and when he tried to spit at me I am afraid I lost my temper momentarily and loosened his front teeth with my right fist. He calmed down then so I was able to explain that I had been waiting for him and that he had had no right whatsoever to steal my daughter's handbag and her boyfriend's Macbook.

I reached under the sofa for the washing line and the belts. I had placed them there at the start of the long weekend in anticipation of this moment. It was a struggle but my will prevailed and soon the rat was trussed up, tied to a chair. I noticed he was trembling and that he had most certainly peed his trousers. Disgusting little rat.

"Wot you gonna do?" he whined.

But I hadn't thought ahead that far.

As some of you will recall my daughter was robbed last Tuesday evening. Her handbag contained the keys to her own flat in south London and sure enough this past weekend the robber travelled down to  Camberwell to rob her a second time. She was away at a wedding in North Yorkshire and then she had to work in Manchester on Monday. When she got back, she found the door to her flat had been left open and a few items had been stolen but nothing of great value because she had anticipated such a visit and had even had one of the locks changed. But still the rat came in. In reality, I am sorry to say that  I wasn't waiting for him. As the title of this blogpost suggests, all of that was just a delicious fantasy.
- October 05, 2016