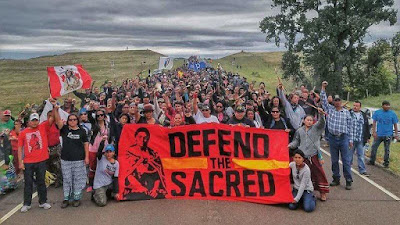 Straddling the border between the states of North Dakota and South Dakota there's a large indian reservation called Standing Rock. It has a land area of over 3,500 square miles and is an echo of times long gone when North America was home to hundreds of different native tribes - each with its own customs and lifestyle. Generally, these first people lived in peace - like the aboriginals of Australia - close to Nature and respectful of it. When white men arrived, the injustices meted out upon native Americans were unspeakable but it is a tragic story that is not over - it continues to this very day.

Standing Rock reservation is home to some eight thousand descendants of the Hunkpapa Lakota and Yanktonai Dakota Sioux tribes. The land is ancestral and it was here that their indian forefathers hunted  great buffalo herds - taking only what they needed. Despite the legacy of sadness that pervades all indian reservations, Standing Rock would no doubt have remained a quiet and forgotten corner of America until the arrival of a  company called Energy Transfer Partners earlier this year.

Their mission is to build a dirty great $3.8 billion oil pipeline all the way from North Dakota down to Illinois. The course of this pipeline passes through native American lands, very close to Standing Rock and seriously threatening the reservation's only water sources. With the support of government agencies, this company have sought to ride roughshod over any protests - legitimate or otherwise. Interestingly a certain Donald J. Trump is believed to have up to $1 million invested in ETP.

Native Americans from all over the country have arrived at Standing Rock  to populate a peaceful protest camp as ETP have used both private security guards and state troopers to ensure that the pipeline work at Standing Rock continues On Friday 141 protesters were arrested - mostly on questionable charges. Tear gas and rubber bullets were used as sections of the protest camp were destroyed by the police.

The political media organisation "Democracy Now" have been following developments at Standing Rock all this year. Their lead reporter, Amy Goodman, was even charged with riot though how anyone could riot while interviewing protesters with a microphone is beyond my understanding. It was another trumped up charge, if you will pardon the expression.

Former Vice President and thwarted Presidential candidate Al Gore has spoken powerfully in support of the Standing Rock protest. He said,  "The courage and eloquence of the Standing Rock Sioux in calling all of us to recognise that in their words, “Water is Life,” should be applauded, not silenced by those who are driven by their business model to continue spewing harmful global warming pollution into our Earth’s atmosphere."

For fuller information about what has been happening at Standing Rock, go to the Democracy Now website. 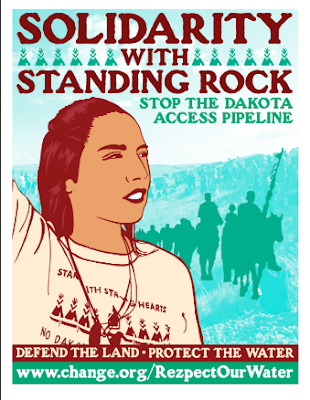