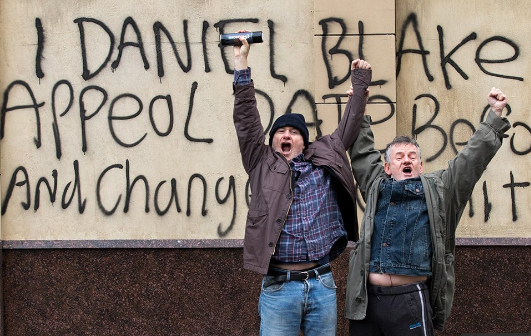 A few days ago I went to the pictures to see the latest Ken Loach film. It is titled, "I, Daniel Blake". The theme of it attracted me - a working man exasperated and defeated by bureaucracy following a heart attack. While his doctors say he must not return to work, the systems of the state are just not listening.

It is like being trapped in Franz Kafka's "The Castle". No matter where Daniel Blake turns or how much he tries, he cannot find justice. He tries to jump through the official hoops but to no avail. He is plunging into a poverty trap.

Ably played by Dave Johns, Daniel befriends a young mother called Katie who has ended up in Newcastle with her two children. She too has become a victim of uncaring state bureaucracy. They stick together and help each other in different ways.

At one point, Daniel sprays a message of protest on the concrete walls of The Job Centre - "“I, Daniel Blake, demand my appeal date before I starve.” When he finally secures the desired appeal meeting, Katie accompanies him to provide moral support. In the waiting room, Daniel starts to feel unwell and never returns from The Gents. There'a sense in which he has effectively been killed by government agencies.that are meant to provide welfare to those in genuine need. It is a very modern tragedy.

This was a well-intentioned film with a powerful core message and I am aware that it won the prestigious "Palm d'Or" at Cannes this summer but I came away from the cinema feeling a little disappointed. Why didn't the police charge Daniel with criminal damage when he sprayed the wall? Why was the funeral eulogy read  by Katie and not by a family member or old workmate? Why did Katie's daughter speak without a regional accent while Katie herself had a broad London accent?

There were numerous similar irritations which I wouldn't have expected from Ken Loach. They tended to nibble away at the illusion of reality, causing unwelcome distraction. He was tackling a social theme that very few film makers would even think of exploring. The many victims of state bureaucracy - those who visit food banks and get crushed by The System desperately need champions to sing their painful songs and spark change.
- October 28, 2016