Up here in Yorkshire, the weather has been pretty dismal most of the week. Occasionally, we get winter weeks like this when our world is blanketed by  a thick, unbroken layer of cloud. Above it aeroplanes will no doubt be flying in bright sunshine but down below we exist in a murky half'-light.

When I pulled back the curtains yesterday morning, it was another grey day. That is what the weather forecasters had predicted so the gloominess was no surprise. I had an idea for a poem and once downstairs with this laptop switched on, I began to compose it. Here it is:- 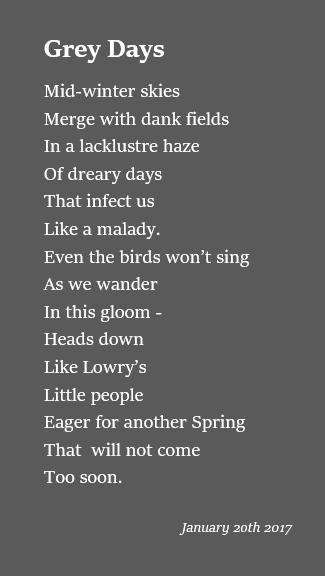 Have you ever heard of  Sod's Law? As I was honing these lines, an unfamiliar  brightness appeared in the January sky and through our bay window I even spotted a small patch of blue. The meteorological people had got it wrong! The grey days were at last giving way to light.and colour.

Standing in the shower, I contemplated a country walk - not too far away from home. Ten minutes later I was on my way to the parish of Bradfield for a sunny walk round Agden Reservoir and it was quite delightful to be out and about once more... walking in the light.
- January 21, 2017