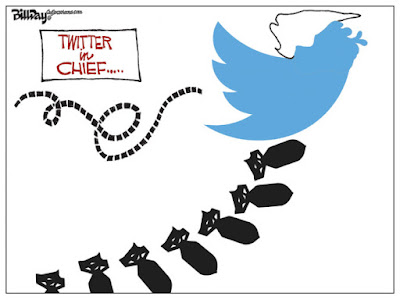 Though the internet has gradually claimed a significant chunk  of my life, there are features of it that do not appeal to me. This aversion is instinctive. For example, I don't "do" Facebook and I am anti-Twitter. Regarding the second facility, I guess it helps that I have never owned a mobile phone - smart or otherwise - and Twitter seems to be principally designed with phone technology in mind.

It might be argued that blogging is itself a self-indulgent narcissistic activity but surely far less so than Facebook or Twitter. As someone who earned his living on the back of the English language, I am repelled by the very idea that thoughts or arguments might be effectively dealt with in just 140 characters. It is an insult to scholarship and rather boorish too. Facets of human experience usually deserve and indeed require far more than 140 characters for proper expression. 140 characters should be no more than a headline or a title but certainly not the whole caboodle. No way.

In contrast, President Elect Trump seems to be a Twitter enthusiast. Since his election, he has been firing off tweets almost on a daily basis with little regard for the gravity of his office or the responsibility that this will entail through the next four years.

I imagine him in his silken bathrobe, lounging in the penthouse suite of Trump Tower. Melodramia has already gone to bed having once again successfully dodged The Donald's crude grabbing technique. He pours himself a large glass of Trump whisky and grabs his smartphone instead. Frigging Melodramia! What can he tweet about tonight? Hillary's e-mails? The Great Mexican Wall? American car companies?  Obama's birth certificate? There's nobody to stop him. He can say what the hell he likes - if he could only spell Guantanamo. It's disturbing. It's scary. The Leader of the Free World creating policies on his smartphone in the middle of the night. Stirring hornets' nests, not giving a fig for the ripples his tweets might cause. He's like those spotty keyboard warriors who fire out nasty remarks, smugly believing they are safe behind their pseudonyms. They can say what they want - just like The President Elect.

Meanwhile over at Donald J. Trump's official website they are selling badges for his inauguration, bumper stickers, baseball caps and T-shirts. You might also be interested in Trump eyewear, Trump suits and neckties. Trump leather accessories or perhaps his latest book, "Time to Get Tough" which is of course subtitled "Making America Great Again". When did it stop being great? I suspect it stopped on November 9th last year when  Mr Trump crossed the line.

Life is filled with questions. Who the hell is Jackie Evancho? What is the "Movement" and why did The President Elect choose to put that word inside inverted commas? Was this choice significant and does "Movement" really mean something else?
- January 05, 2017