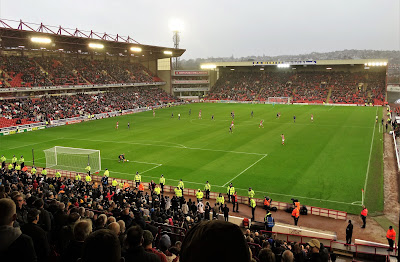 Above - the view from my seat at the Oakwell Stadium, Barnsley last Saturday afternoon. I was one of almost five thousand  Hull City supporters who turned up to watch our team achieve a rare away victory. It was a cold and miserable afternoon and I still wasn't feeling too well but the result lifted my spirits

It was Fraizer Campbell who managed to stab home the winning goal in the seventy eighth minute. igniting a roar of delight at my end of the ground. For those who don't particularly like football or fail to understand the passion that surrounds it, you may now wake up! This blogpost is over.
- October 26, 2017