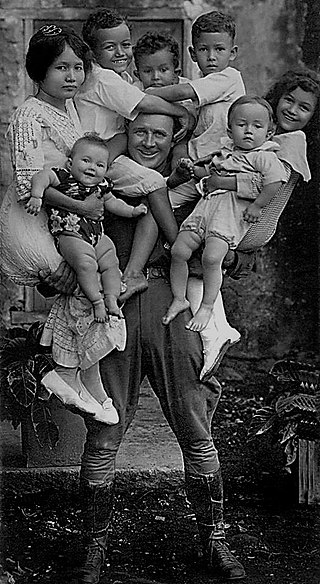 It's quite a picture. A strong man has lifted his entire family off the ground for the benefit of the photographer. There are six children along with  their mother. I have no idea if he was married to that woman but the couple are sometimes referred to as Mr and Mrs Bowler.

She doesn't look very happy does she? She isn't laughing.  I know it's just a snapshot, a moment in time, but here's a real sadness about her demeanour. In contrast, the children seem happy and healthy enough.

The picture was taken in The Philippines, an island nation which has hosted American military bases since the end of the nineteenth century. This particular picture dates from around 1930.

The children can be described as Amerasians. It is estimated that there at least 52,000 Amerasians in The Philippines - probably many more than that. Being Amerasian isn't always easy. Often the father will have disappeared back to America and the offspring may find themselves shunned in the host country. Many became virtual social pariahs.

There are thousands more Amerasians in Korea, Vietnam and Thailand. It seems that wherever the American military have been located for any length of time they find a very intimate way of underscoring their might. It was the same in Great Britain during the second world war.

War is meant to be about territory and overpowering the enemy. Swords and bullets, aeroplanes and tanks, strategy and victory or defeat. But history shows that it is also about impregnation and the careless fathering of children who, very sadly, are frequently destined to lead troubled lives.
- October 24, 2017