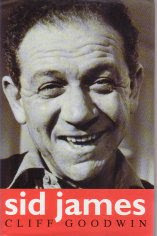 On this day back in 1564, William Shakespeare was baptized in Stratford-upon-Avon. It was also the day, in 1894, when Rudolf Hess was born and in 1976, it was the day on which the British/South African* "Carry On" comedian Sid James died (notice the capital abuse on the front cover of his biography!). In 1999, British TV presenter Jill Dando was murdered on this very day and in 1956 it was the day on which the world's very first container ship left New Jersey for Houston, Texas. April 26th - an unexceptional day in human history. I wonder what today will hold for all of us. Will it be an unspectacular working day soon to be forgotten or will it be one of those days that get etched in your memory forever? As they say in certain American eating establishments - "Have a nice day!" or as they say in certain English pubs at closing time - "Sup up and piss off home!" What rhymes with April the twenty sixth?
* Thanks to Mutterings and Meanderings for pointing this out. I had always thought he was half Australian. Quick research tells me he was born, wait for it, on Hancock Street in Johannesburg! And that's true.
- April 27, 2007