I don't know much about eskimos. In primary school, I remember a series of books about individual children who lived in other parts of the world and one of them was an eskimo. He wore animal furs and fished with his father. Sometimes he slept in an igloo. Obviously eskimos are experts at living with cold weather. Like many urban dwellers, I was always enamoured by the idea that eskimos have lots of different names for snow. I imagined they had a vocabulary that covered thin powdery snow, fluffy snowflakes, snow that threatens to become hail and snow that drifts against your igloo. It seemed right. To have a language that helps you to better define the intricacies of your environment.I was hoping to create a similar vocabulary for rain. 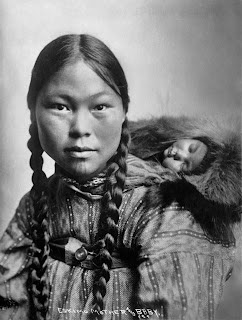 Beforehand, I thought I would surf the net to research those mythical eskimo snow words. It wasn't too long before the bubble burst. Clearly and sadly, the "eskimos" have no more words for snow than you can find in English. The myth is just that - a myth. Disappointment deepens with the discovery that the generic term "eskimo" is a useless catch-all word that in a rather condescending, semi-racist way sought to group together all the disparate peoples of the arctic islands and wastelands of North America. They had many different languages and cultural histories - these so-called "eskimos" were never united as one race. They had as much in common with each other as the Irish have with Slovakians or Danes with the Portugese.

So with the wind slacking in my sails, on to that rain vocabulary... "gossamer" - the finest rain of all that is so light it feels like you're being doused with icing sugar dust.... to "lakedistrict" - rain that you could almost drown in - that descends in bath loads and never seems to cease.... to "eskimo" - rain of mythological proportions.
- November 23, 2007