Seven of them to be precise and all deadly:-

Luxuria It’s 1980. I have been to see the Rugby League Cup Final at Wembley. With a couple of hours to go before our train leaves for the northern wastelands, we stumble into a Kings Cross pub which we later always refer to as “the worst pub in the world”. There’s glass on the floor and spilt beer, vomit, sweat and blood and on the little stage is a brazen girl of maybe twenty stripping off for a baying crowd of leering drink-fuelled men. This isn’t exotic titillating striptease. It’s a lasciviously physical back street version. A grinning young man clambers on to the stage and copulates with the willing star as the wolfpack cheers and stomps. Disgusted, I turn away.

Gula It’s 1986. There’s a restaurant on West Street in Sheffield. It’s called “Scoffers”. Pride of place in the menu is The Scoffers Killer. Eat it all and you don’t pay. Too much of a challenge for my brother Paul. It comes. There are lamb chops, a burger, a couple of thick sausages, a piece of chicken, a twelve ounce steak, a pork chop, a slice of gammon, a mountain of chips and a hillock of peas. He starts. Like a marathon runner pacing himself. Thirty minutes later it’s all gone. The waiters are looking for signs of cheating – meat under the table. But he didn’t cheat. He ate the whole thing. The first and last time it was ever done. He is sweating cold beads of perspiration as we walk away.
Avarita It’s perhaps 1962. Each Easter we get one chocolate egg but other kids in the village are given more. I empty my money tin and walk up to the village shop to buy the one I always wanted – the white chocolate Milky Bar egg. Beaming, I walk home with my chocolate gift but mum sees me coming in with it and accuses me of being an “ungrateful, greedy little sod”. Ah well. 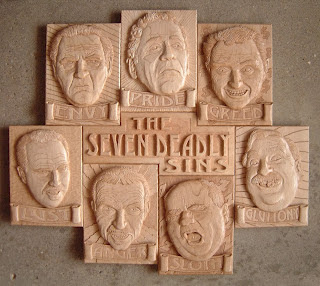 Acedia It’s summer 2007. It’s raining. I want to be gardening or extending our stone garden path but for the third day running I am up late. I make a cup of tea and pour myself a bowl of “Crunchie Nut Cornflakes”. There are house programmes on the TV – “Homes Under The Hammer”, “A Place in The Sun”, “Grand Designs”. I watch them all. Mail comes through the letterbox but I don’t get up. After midday, I muster the energy to have a shower. Then I go outside to feed the birds. Returning to the sofa, I fall asleep then watch other daytime drivel like “The Jeremy Kyle Show”. Shirley returns from work moments after I have managed to dress myself. “Been busy love?” “Yeah!”
Ira 1977 and I have returned to Ohio to be with my American sweetheart at the summer camp where we met. Like characters in a romantic film, we exchanged letters and gifts all year. Nobly, I spurned all other love opportunities in the months between. Then she lets me know she has found somebody else and she is dumping me. I pour a pitcher of beer over her head and bellow out my red-hot hurt and overflowing anger. Someone restrains me. It’s probably Chris.

Invidia He’s sitting in the pub. His life is simple. I could call him a “loblollyman” after Philip Larkin. He works when he wants, painting people’s houses for beer money. He never has to advertise. Word of mouth is a better testimony. His dog is called Monty. They go everywhere together. They live simply in his mother’s old house. He doesn’t read or have any interest in politics or travel. Whenever I see him, he always asks me how I am and “How’s the family?” My life and my interests and urges seem so complicated in comparison. But for him – for Derek – the simplicity satisfies him completely.

Superbia Perhaps it was 1992. I am at a schoolteachers’ conference about - of all things – spelling. It is led by the “famous” spelling guru educationist - Professor Charles Cripps. There are some two hundred teachers in the room. Cripps wants us all to feel what children might feel when put on the spot about their spelling so he gives us a fifteen word spelling test including such trickeries as “diarrhoea” and “liaison”. We exchange sheets and then we are asked to feed back our results. “Anyone get fifteen?” grins Charles. The audience are chortling. I put up my hand expecting to see others but I am the only one. These are educated people – teachers. None have fourteen. Half a dozen or more have thirteen. I am a beaming big-headed spelling champ. Others look at me in unbridled admiration….
Footnote: My Yorkshire compatriot, Arctic Fux suggests that my "Seven Deadly Sins" idea might be another "meme" challenge for nominated bloggers, so... drum roll... I hereby nominate Mr Arctic Fux ( and anybody else who fancies the task).
- November 02, 2007