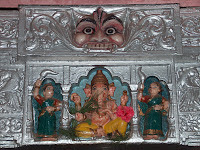 Under a jackfruit tree and slender palms heavy with coconuts, past the old well and a sleeping light brown dog where unfamiliar birdsong begins the afternoon's soundtrack. Along that sandy path there's a flash of green wings as a chipmunk scurries into verdant undergrowth. The air is like warm honey and the sand so hot your feet don't linger. Up through the last little bushes of the dunes and in front of you there's the rippling Arabian Sea bursting rhythmically on a wide arc of golden beach that stretches from the Portugese fort at Sinquerim northwards to Baga. 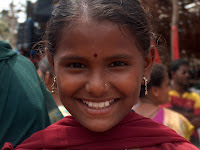 To the left there's the tumbledown "Baywatch" beach shack and to the right there's "Blue Waves" - all bamboo and coconut palm matting and "Kingfisher" advertising boards with a few knocked up wooden beach loungers. Our sound track continues with melodious surf on sand. We turn right greeting Mustaffa and order lime sodas followed by simple Goan fish curry and rice with chapatis and aloo gobi. It emerges twenty minutes later from the mysterious rear of the unpromising shack but is food you might die for costing little more than three pounds. 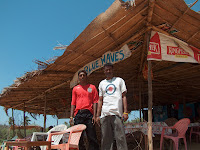 I enjoy the laziness of hot beaches. You slow right down, turning pages of a book, watching a crow cawing on the bamboo canopy, wondering idly if yesterday's dolphin will resurface. When your temperature rises and the mood takes you, you search coolness by plunging into the sea. It is almost tepid. You could stay there all day. When you emerge you don't even bother with a towel. You enjoy the cooling sensation of salty water droplets evaporating from your skin. You order a "Kingfisher" beer - the advertising has worked. You're beach crazy. 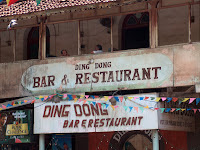 We loved Goa and wished we could have stayed longer on the massive peninsula that is India. We loved the chaos and the niceness of the people. We liked the birds and the buffalo, the curries and the tuk-tuks, the lush tropical greenery, the intricate wood carving and the market traders, the bird watching expedition we took in a hollowed out mango wood canoe with our guide - Ulay and of course the healing warmth of the sun. In Goa, Portugese Christianity meets the more ancient pathways of Hinduism as the Mandovi River meets the sea. 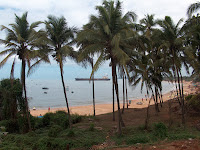 India has always been special in the recesses of my imagination because it was there - in Delhi - that my parents were married at the end of World War II. They came back to England with jewellery boxes, miniature ivory elephants, gemstones, stories of walks in the Himalayas, hammered brass tables and a pair of wooden bookends that told an ancient Hindu tale. They were both in the Royal Air Force and for anyone stationed in India it had been a different kind of war because the Japanese enemy never arrived. Mum and Dad returned by boat round Cape of Good Hope to begin a new life together. We came back by Monarch Airlines with a handsome rosewood elephant called Jumbo who will sit nicely on the hearth in our back room - reminding us of our dreamlike holiday and of the special land that remains India. I dedicate this post to Mum and Dad - wishing they were still here so that I could tell them new tales of their beloved land. 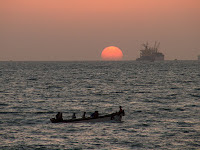