Sheffield is a hilly city with five small rivers flowing through it. The suburban village of Stannington lies on a bluff between two of these river valleys - The Rivelin and The Loxley. Loxley? Now doesn't that ring a bell? Robin of Loxley - Robin Hood! On the northern edge of Stannington, along a narrow country lane is a remote country pub called "The Robin Hood". It was built in 1804 and against the commercial odds continues to provide refreshment to this day. 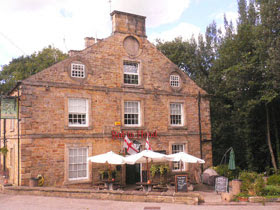 I had never been there before. Shirley asked me if I wanted to join her and the Tuesday night crew for a meal at "The Robin Hood". We jumped in the car at eight, ready for the twenty minute drive to Stannington. I assumed she knew where we were going and that our friends Steve and Moira would have given instructions. Almost an hour later after a fruitless exploration of Upper Stannington, along with various halts to look at the A to Z, some cursing and a quarter mile demonstration of reversing up Greaves Lane, a couple of mobile phone calls and a discussion with a pedestrian, we finally arrived at the old pub.

It was almost empty but we were just in time to order a meal. Our friends were already sitting round a massive pine kitchen table awaiting our regal arrival - "Why the *!?* didn't you tell me you didn't know where we were going?"
Anyway. The meal was brilliant. I had delicious locally sourced pork sausages on a bed of mash surrounded by garden peas and plum wine gravy - washed down by two pints of a Sheffield Ales special - "Tinsley Towers". This was followed by the best brownie dessert I have ever had - warm, laced with hazelnuts and topped with a single scoop of homemade vanilla ice cream. Then coffee with a fresh macaroon. Mmmm! On the way home, the arduous challenge of actually getting there was forgotten. I had already forgiven Shirley for her geographical dyslexia and navigational witlessness. 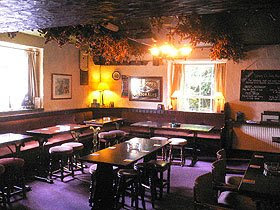 We would both happily visit "The Robin Hood" again but next time we won't be doing a nighttime patrol of Stannington's many streets. The pub is on Greaves Lane by the way but the old track is now closed off half way down. The reversing manoeuvre had begun just a hundred yards up from the old pub which is situated on the lower end of Greaves Lane.