In modern times, in the rich western world, when we have children we photograph them - again and again. Photos of our children fill albums and boxes and more latterly the hard drives of our computers. When our kids were little I was always snapping away - like Lord Snowden - almost as if I couldn't believe they were here with us.
One summer - 1990 - we borrowed Shirley's parents' car and caravan for an economical but very lovely holiday on the coast of Northumberland. It was a great summer - the sun shone and our children were healthy, happy and beautiful. I brought in lobster pots with two fishermen I had met in Low Newton and later, as a young family, we walked along the beach from Dunstanburgh to Craster where we bought freshly smoked mackerel for dinner.
When we returned to northern Lincolnshire, Shirley's dad was harvesting with his old yellow combine - in a field just across from the family farm. Ian and Frances clambered out of the hot car and we led them into the field where their grandad was cutting the corn. It was then that I snapped this picture. I always think of it as the best picture of their childhood I ever snapped - number one above a thousand others. I just scanned it today:- 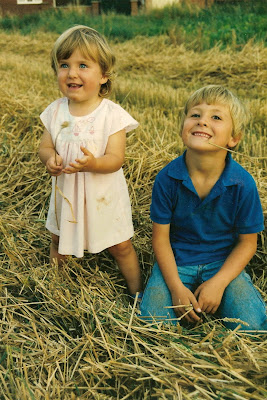 Ian was just six and Frances was almost two. He's twenty four now and she'll be twenty next Friday. What I love about this picture is its naturalness. It wasn't posed. He was kneeling in the stubble with a piece of straw in his mouth and she was holding a stalk of corn. I just wheeled away from the photo I had just taken of Charlie on his combine - bringing in the corn - and there they were behind me... young and happy and innocent.