Most people I know really have no idea what Britain is doing sending young men to their deaths in Afghanistan. It has never been properly explained. Are our lads there to stifle the bubbling up of Islamic extremism as represented by the Taleban and Al Qaeidah? If left, would terrorist numbers increase to such an extent that they would take over the world? How do military strategists and politicians know this? After all, so many errors were made in high places in relation to Iraq as the western coalition searched for weapons of mass destruction that never even existed. Could they be wrong about Afghanistan too?
Helmand province produces 42% of the world's opium. Are the so-called "insurgents" partly motivated by a selfish economic desire to protect this vital cash cow? And what has the war in Afghanistan got to do with oil and the west once again protecting its fuel sources for the future? It is all so very confusing. Shouldn't history books have taught present day invaders that victory in Afghanistan is in any case always unreachable?
In the meantime, 176 British fighting men have died there. Many have been blown to pieces by roadside bombs and landmines. Below are photographs of the two Sheffield lads who have met their tragic ends in that hostile land. I wonder if they were clear about what they were fighting for? Here's David Marsh aged 23 years - a marine - he died in Helmand in March 2008:-

And here's twenty year old Christopher Bridge of the RAF - he died in Afghanistan in August 2007:- 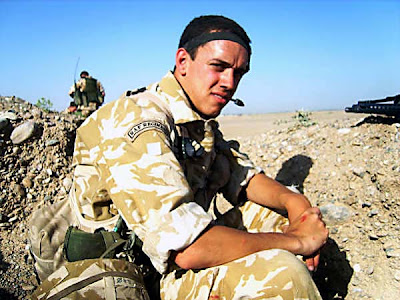 They were sons with siblings, girlfriends, mates, neighbours and expectations of long lives ahead of them. It would be bad enough to die fighting in a war you believed in - combating the scourge of Nazism or the brutality of Serbian separatists - but to die in Helmand, so far away, in an endless war you don't even understand makes their deaths all the more tragic.

I am reminded of Buffy Sainte-Marie's anti-Vietnam war song, "Moratorium" and the plaintively repeated chorus - "Oh bring our brothers home! Bring our brothers home!" And by the way, the "mission" in Afghanistan is currently costing the British taxpayer an estimated £7 million a day. Over eight years, that's a lot of hospitals, schools, environmental projects, job creation schemes, road surfaces, transportation infrastructure improvements and handouts to the elderly. Bring our brothers home!