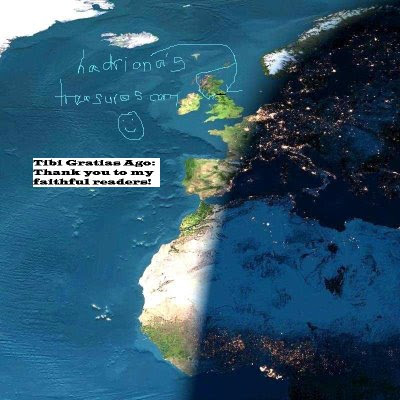 Recently, I was honoured to receive this blogging award from the nice lady at Hadriana's Treasures. As you can see, the professionally designed and iconic award image is itself one of Hadriana's treasures! The shadow of night-time passes across the planet leaving most of Africa and Europe in darkness. There's a little black line to show the rough position of Hadrian's Wall - the northern boundary of the Roman Empire in Britain. Beyond that there were Picts and Scots and other uncivilised kilt swirling, haggis scoffing hordes. It's surely one of the biggest mistakes of the last two thousand years that they let that wall fall into disrepair. If they had maintained it, we wouldn't have had to suffer The Krankies or that big-headed

pseudo-working class comedian, Billy Connolly or that miseryguts tennis player - Andrew Murray and whisky-swiller Sir Alex Ferguson would still be managing Aberdeen... Mind you I suppose there have been some benefits in the union - we get to drink "Irn Bru" and shoot grouse, Reidski has become a "boss" in London and we got to see great Scottish footballers like Denis Law, Kenny Dalglish, Billy Bremner and of course Andy "Jock" Davidson - the Hull City legend (see right).
Thanks to Hadriana for the award. I humbly accept it.
- July 21, 2009