Let's travel back in time. Back to June 1974. I'm a university student and not particularly fashion conscious. I have long hair, a full beard and I like to wear an old khaki US Army combat jacket that I bought from a secondhand military store in darkest Glasgow. Earlier that year I developed a yearning to make my first time visit to a large island on the edge of Europe - you might have heard of it - it's called Ireland.

I have hitch-hiked to Leeds-Bradford Airport, staggering under the weight of my old rucksack that is packed with all I will need for a month on The Emerald Isle. I am twenty years old. I check the rucksack in at the check-in desk and then I wander off with my book - "The Magus" by John Fowles. I sit reading it with a cup of coffee, wondering how I might reduce the weight of the rucksack and how on earth I will be able to waddle round Ireland with the damned thing.
Before I can get to the departure gate, I am accosted by a posse of customs men. They frogmarch me into a secret room, dominated by a big oblong table with an inlaid black rubbery plastic surface. Sitting on this table is my designer rucksack in all its khaki boy scout glory.
The customs men stand back. "Open it up!" the leader commands. They edge closer to the walls. I remove my nylon raincoat, my old Blacks canvas two man tent, my carrier bags containing socks and Y-fronts. I toss out my writing pad, my torch, a sweatshirt, a rolled up towel, a pair of blue Adidas trainers, a couple of shirts. a melamine plate and a spare pair of Wranglers. Right down at the bottom is my Gaz camping stove and a clever collection of cooking utensils that click neatly together - a kettle - a saucepan and a frying pan.
Detecting sharp intakes of breath from my observers, I realise that it's this pan collection that most interests them. "Open that up!" orders the mustachioed leader. I separate the pans and reveal a package I have hidden in the saucepan. It's wrapped in aluminium foil. The customs men are quivering. What is it? Hard drugs? Or more likely dynamite or Semtex. I peel back the silver paper to reveal a half pound of best Yorkshire lard. Their relief is palpable.
I explain that I need the lard for frying eggs and bacon. They are smiling now. And it was only later that I reflected on the Troubles in northern Ireland in 1974 and how I might have looked like a crazed paramilitary sympathiser - off to join the IRA or the UDF or some other such organisation. Little did those customs men know, I was planning to see sunsets, drink Smithwicks in country bars, talk to old men, write poems, read books and dance with a green-eyed colleen upon the moonlit strand at Inch. 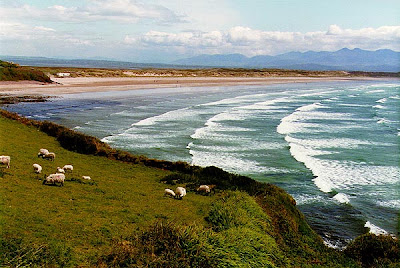