In job interviews of a certain ilk, a member of the smirking interview panel might sometimes ask: "And what makes you angry?". You'd like to say - "Interviewers like you! People who dangle stupid questions as if taunting donkeys with carrots. People who probably don't even know what being angry means!" Instead you say: "Anything that stands in the way of meeting targets", or, "Realising there are not enough hours in the day to achieve all you want to do".
Is anger a bad thing?
I think it would be bad if you spent your whole life in an angry state. Angry at the supermarket checkout woman who's talking to her colleague at the next till, angry at Simon Cowell's "X-Factor" media-cult, angry at dog owners allowing their mutts to foul the street, angry at racism, sexism, plagiarism, fanaticism, terrorism. If you were permanently angry, your life would hardly be worth living. In spite of it all, we need to chill out, laugh, find time to be calm, ride over the rocks that appear before us as we bounce down the rapids that we call Life.
But I wouldn't dismiss anger. I think anger has its place and is often more healthy than neutrality. When you get angry about things - these may be the times when you feel most alive. You're engaged with issues - either at a personal level or in relation to wider local, national or international matters. I'm a devout atheist but I recall from "The Bible" that even Jesus got angry when, for example, he allegedly overturned the moneylenders' tables. Calmness, karma, level-headedness, chilling out, not being "bothered" may occasionally be inappropriate, unnatural responses to situations that deserve anger's fire. 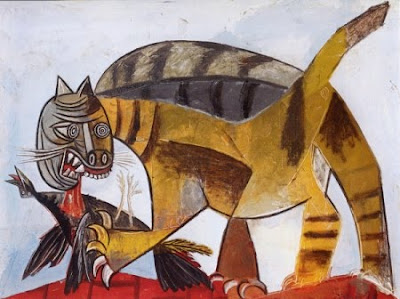 "Cat Devouring a Bird" by Pablo Picasso 1939
Why deny anger or try to disguise it? If it's there inside you, what's wrong with allowing it to surface? Surely that's healthier than letting it gnaw away at your insides like a cancer.
I'm angry about George Osborne with his massive bulletproof personal inheritance fund telling his fellow citizens in melodramatically paused sentences that we're "in it together" as he cuts away at vital services. I'm angry about parking regulations and angry about every single scrap of litter that is ever dropped. I'm angry about university tuition fees, child deaths from diarrhoea, The Tesco Monster, Nick Clegg, Grumpy Old Ken, my last headmistress, mobile phone masts, the persecution of tigers and whales and pandas. I'm angry with myself for failing to follow certain things through such as song-writing, decorating the bathroom, writing projects, sifting through the stuff in the attic, reading "The Origin of Species" or simply wasting precious time.
I like the idea of "angry young men". When I was younger, I would occasionally express my anger not only verbally but physically. Even now, I recall things that happened back in the day that I have never shared with anyone and they all arose from anger. Of course, the only sure-fire way to maintain a secret is to keep it completely to yourself. So please don't ask.
The angry young man in me never really went away. He's still there sleeping lightly but I have learnt to live more happily and harmoniously than before. What may have made me angry in the past can sometimes seem like water off a duck's back these days. But I still recall Alcibades's pertinent question to the senators in "Timon of Athens" - "Who is a man that is not angry?" The day you lose the capacity to be angry is the day that you have finally given up on life.
- October 26, 2010