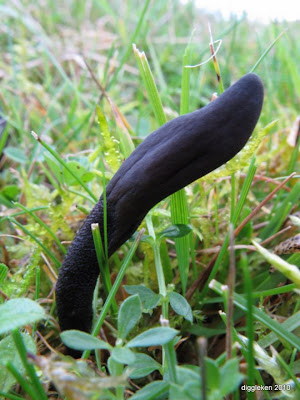 The other day, I noticed some things on the lawn, near to the rotary clothes dryer. I thought perhaps they were blackened pieces of newspaper blown from somebody's garden bonfire or maybe feathers evidencing a cat's dawn assault on some unsuspecting blackbird. Returning from my digging expedition, I observed that the stuff was still there. This time I crouched down and quickly realised that I was looking at strange black fungi spears poking through the turf. I'd never seen such a fungi before - or maybe I had seen it but just didn't take the time to notice it.
As we all know, autumn is the best time for fungi. In forests, on rotting trunks, in meadows and on lawns, toadstools and mushrooms quietly appear poking their strange little heads at the sky. One day you don't see them and the next day you do. Mostly we expect them to have little stems supporting heads of different hues with little gills beneath. Unless we are fungi foragers or botanists specialising in the field we don't expect fungi to look like the odd black growth shown in the photograph above.
There must have been at least thirty of the little black spears within about a square metre of lawn. They were all between half an inch and two inches tall.
Internet research tells me that not only are there over 100,000 different types of known fungus in the world with thousands more still to be catalogued but it also tells me that the little black spears are commonly known as "Earthtongues". However, there are many different sorts of "Earthtongue" and ours may be either "geoglossum cookieanum" (as in the photo) or "geoglossum fallax". In reality, I think it would take an expert with a microscope to say for sure.
I come to realise that it would be possible to spend a lifetime simply studying "Earthtongue", recording its geographical distribution and the characteristics of the many different types. Apparently, this odd fungus can be found in many parts of the world but until Thursday morning I had no idea of its existence. And it wasn't in the Serengeti or the wilds of Alaska - it was just outside our back door.
- October 31, 2010