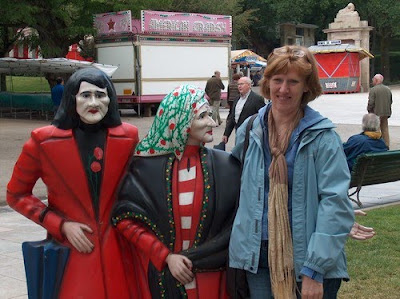 Above you can see our lovely friend Moira - when we visited Santiago di Compostela in north-western Spain with her and her husband Steve, a retired fifrefighter. Moira recently started following my blog and I know she will be very surprised to see this post. Steve and Moira are presently in India. They touched down in Bombay (I refuse to call it Mumbai) and she emailed her first impressions to several friends. Moira is an incredibly fast typist. After all, this is something she has had to do most of her working life. That factor helps to explain the rapidfire, gushing nature of her account which I find a fascinating, unfettered piece of "stream of consciousness" writing which really captures a westerner's initial view of what must be a crazy, alien and overwhelming metropolis to encounter, full of sights, sounds, smells and human energy. Here it is:-
hello all !
arrived safely mumbai airport ... then hour longish taxi via mad mad mad bonkers traffic ..... horns go allllll the time ..... you take your life in your hands (literally !! ... rob why didn't you mention this !) ....when crossing the roads ..... however seen no one run over yet although 2000 homes have just burnt down in one of the shanty towns ! how the fire engine would get there i just don't know .... talk about a culture shock .... however blending in a bit more now, beginning to get the hang of things a bit/how folk work ! my red hair seems to draw attention from a lot of children ! hotel we have been in fine-ish ..... big holes in the sheets .... rather a yuk toilet .... waaaah .... but loads of hot water ... and extremely friendly/helpful proprieter, Raj .... (hotel moti international .... just near posh-ish hotel The Taj ..... which we couldn't afford ... ! which is just more or less next door so we are sort of with the posh folk !! ??) The gateway to india is about five mins away <>>>> so hot don"t want to eat much<>>> expensive for backpackers like you >>>> and us !) ..... not getting too harrassed ..... off to goa on early train in the morning 12 hours long journey then onto hampi .... then kerala all being well ...... just about to go and eat somewhere ..... first meal we had cost about two quid all in ..... though there are some more expensive places that a lot of folk go to .... rob ... been in mondegar cafe too a few times for breakfast .... near regal cinema ..... been in musem and art gallery but will be glad to move on from mumbai as soosooooo crazy/frantic/traffic amazingly never ending ever ever ever .....where do all the people live ?? ... a place all should come to once .... a couple of ozzy girlst told us they'd just come from delhi and think mumbai is laid back compared to there !! oh my god i don't think i'd be able to take it !! they say mumbai not as much in y'face ..... everyone seems to be in y'face here!!!! but no, not really that bad .... just biggggg culture shock .....but we are quickly adjusting to what's what ..... righty ho all, 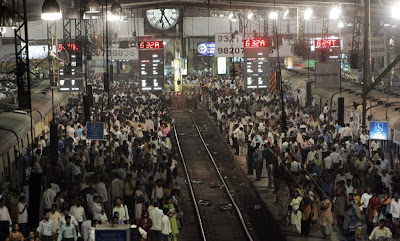