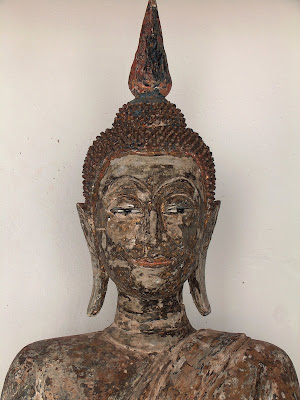 Buddhism is based upon the teachings of Sidhartha Gauttama who lived around twenty six centuries ago, growing up in the region we now know as Nepal.He became known as "The Buddha" in his lifetime. It means the "awakened one" or "the enlightened one" for, allegedly, he experienced a profound realisation of the nature of life, of death and of the nature of existence.
He taught that awakening comes from one's own experience - not from any sort of religious dogma. In Buddhism there is no "god" as such, no divine figurehead. The images of Buddha that we are all familiar with are not adulatory. They simply serve to focus thought, to help Buddhists along the road to personal enlightenment.
There are probably 400 million practising Buddhists in the world, largely in Asia. In Thailand you cannot escape from Buddhist imagery. Most buildings - even new tower blocks - demonstrate homage to the spirits of deceased ancestors in little spirit houses to which residents or office workers bring offerings. In Buddhism there is no equivalent of the Christian Sunday. Days just go on.
This week a sixteen year old student told me that her grandmother would go to the local temple every day to give offerings to the dead and to strive for her own personal nirvana. Younger Thai people are losing that devotion but the philosophical influence of Buddhism is still very apparent in the lives of the Thai people. It underpins their habitual courtesy, their honesty, their attitude to animal life and the way they see themselves in the grander scheme of things.
I have been anti-religion from childhood and there is no way I would ever become a practising Buddhist. Or is there? Maybe all of us are already Buddhists - striving for happiness, striving for enlightenment. Perhaps being a Buddhist has nothing to do with symbolism or temples or monks in saffron robes. 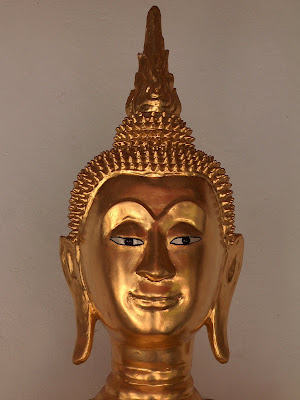