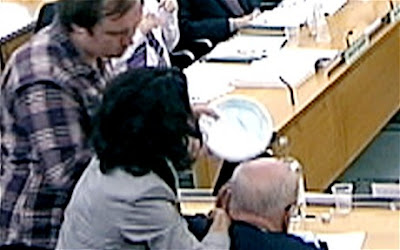 This afternoon the Murdoch dynasty jetted out of England, caring not a fig about how much aviation fuel their private aeroplane was burning up on their merry way to New York. Yesterday's parliamentary committee meeting was notable not just because Murdoch himself came across like a bumbling old man who had just about lost his marbles, but also because his face collided with a foam pie delivered by a certain Jonathan "Marbles". So much for the tight security!
It seems as if an official blockage has prevented publication of full frontal photos of Murdoch with his face covered in foam though immediately after the pie throwing, chief BBC political correspondent Nick Robinson remarked that the sight of tycoon Murdoch's foamy face was something he would never forget.
Apparently the hurler of the foam pie tweeted on Twitter just before his heinous assault - "It is a far better thing that I do now than I have ever done before - splat!"
Of course, it would probably be politic to sensibly deride this self-publicising Jonathan May-Bowles for his stunt. However, I tend to think that what he meted out was a kind of poetic justice. After all, how many people have Murdoch and his phone-hacking minions thrown metaphorical cream pies at over the years? Such a tycoon, such a magnate, the 117th richest individual in the world with shaving foam all over his face - just like a circus clown. There's a sense that this was the perfect punishment for Murdoch. Under questioning he had paused and bumbled like a fool and then in the end, he simply looked like one!
Pity that Mr Marbles wasn't in the Houses of Parliament today to stuff another cream pie in the smug face of Claude Ponsonby-Cameron - our truth-bending prime minister - as he cleverly dodged questions about the appointment of Andy Coulson and pretended he hadn't been close to Murdoch's News International at all! By tomorrow morning he will surely look as if he was carved by Geppetto! 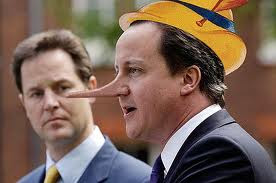