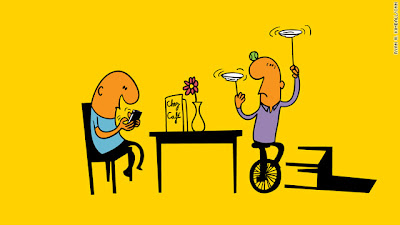 There was a time when as a solitary traveller you would strike up conversations with strangers in bars, in transit or in restaurants. You'd be passing the time of day, maybe exchanging stories, adding to your appreciation of life's rich tapestry - for we all have different stories to tell and how one man or woman sees the world will be different from the next though sometimes it is comforting to find common ground.

"Have you come far?"..."What do you think of the beer?"..."Are you American?"..."Aren't you staying in my hotel?" and so on. And then conversation would be sparked and you never knew where that might take you.

But today it is different because of mobile devices. The stranger plonks himself or herself down and yanks out the obligatory i-phone, tablet or notebook and retreats to a virtual world of Facebook, i-Tunes, email, Skype, digital photos or online games. The immediate neighbouring world where other people really exist is blocked out, somehow deemed to be inferior - less worthy of attention. So the random conversations have almost ceased and there is far less opportunity to connect with strangers. Ironic really when the familiar mantra is that digital devices enhance communication.

I know I have banged on about this before so sorry if I am boring you. But it won't be the last time I consider this modern techno-hypnotic behaviour that is, in my view, spreading like a terrible epidemic around the world - changing what it means to be a human being.

In Sri Lanka there was far less MTO (mobile technology obsession). People were looking outwards as they have done through the centuries, having time for strangers like me - living in the here and now instead of scurrying to their little screens. But in Bangkok, the subway trains and sky trains are filled with goons in technological trances, forever fiddling with their touch screens, grinning about stuff they are hearing secretly through their headphones.  And where ever you go you see workers - security men, cleaners, airport workers, taxi drivers perpetually checking their phones and mini laptops for messages from outer space.

I know it's not going to change. In fact it will only get worse and there's nothing that I or anybody else can do to halt this slide into self-aggrandizement and superficial techno-babble. But like King Canute, I would urge people to switch off their phones when in genuine social situations, to really look at the world we live in and to find time for strangers as our forebears did. There is more to life than the phone or the tablet computer...isn't there?
- April 20, 2013