Back in 1974, politicians messed about with England's traditional county boundaries, forgetting important matters such as allegiance, identity, history, regional pride. I will never forgive them for dumping most of East Yorkshire into the new county of Humberside. That arrangement has now been scrapped and after years of pressure we have our lovely East Riding back. However, Yorkshire is still not as it was. The map below shows the ancient Yorkshire boundaries superimposed over the new economic-governmental zones that masquerade as counties. We want Barnoldswick back and Middlesborough and all those harshly beautiful Pennine villages that fat London politicians stole from us, like Empire builders drawing straight lines to make new "countries" in Africa - totally disregarding culture, heritage and traditional enmities. They think we have forgotten their crime but we haven't. I have a dream that one day Yorkshire people will rise up from their chains, reclaim their ancient county boundaries and shout from every hilltop - "Freedom! Freedom! Good God Almighty - Free at last!" 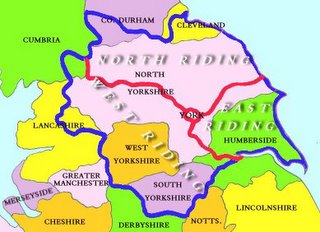 This is what Wikipedia has to say about Yorkshire:-

"Yorkshire is the largest ancient county of England, covering some 6,000 square miles with a population of some five million. It is traditionally divided into West, North and East Ridings (from Old Norse þriðing, "third part", a legacy of the area's ninth century Scandinavian settlers). The county town, York, is not part of any riding.
The emblem of Yorkshire is the White Rose of the House of York, and there is a Yorkshire Day celebrated on August 1. Amongst the celebrations there is a civic gathering of Lord Mayors, Mayors and other Civic Heads from across the county and convened by the Yorkshire Society, in 2004 it was held in Leeds and in 2005 it was held in Bradford. The people of Penistone will be hosting the Civic gathering in 2006. There is also an "anthem" for the county in the form of the folk song "On Ilkla Moor Baht'at" (- On Ilkley Moor without a Hat).
The Yorkshire dialect is colloquially known as "Tyke", and this is also the "affectionate" (!) term for a Yorkshireman, though the term is not universally used by all Yorkshiremen and is virtually non-existent on the North Riding coastline. The social stereotype of a Yorkshireman has a tendency to include such accessories as a flat cap and a whippet. Among Yorkshire's unique traditions is the Long Sword dance, a traditional dance not found elsewhere in England. More recently, Yorkshire has been home to its own genre of techno music, Yorkshire Bleeps and Bass."
- December 14, 2005