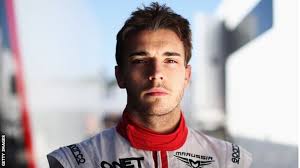 Do you recognise this young man? It is Jules Bianchi, a racing car driver. Yesterday, his car smashed into a big yellow tractor at the side of the Suzuka track in Japan. The tractor was clearing up debris from an earlier crash. In appalling wet conditions, Bianchi careered into the salvage vehicle at high speed and after being prised from his cockpit he was rushed to hospital where he received emergency brain surgery.

For those of us looking in who are not Formula One followers, it seems startlingly obvious that the race in Suzuka should never have taken place. The conditions were dreadful with spray on the track and the constant prospect of skidding  incidents or collisions between cars. But the racing authorities went ahead with it anyway. Why? Because of the money, because of the TV coverage, because fans had paid a king's ransom for their tickets and because the various populous F1 teams had travelled to Japan at great expense over several days. Imagine the cost of transporting all those cars and the spare tyres etc..

You may already be getting the impression that I am not a big fan of Formula One - well you would be perfectly right. In an age when we are meant to be conserving fossil fuels, we allow young men in fast cars to circumnavigate Grand Prix tracks at high speed wasting endless gallons of top quality petrol. And what for? Just so that one of them can cross the winning line first. Whoopee-doo!

We are also meant to be living in a motoring climate where we should be careful about our speeds but Formula One sends out an invigorating counter-message that speed is exciting. I don't think that this is a good message for young viewers who will later become new drivers.

Another reason I don't like F1 is the unevenness of it all. This isn't a sport like sprinting where each man or woman is equal to the runner in the next lane. In F1 the drivers' prospects of success depend very much on the particular racing team they are in. Stick Vettel or Hamilton in different cars and they would probably come last. Perhaps F1 would be fairer and more of a sporting competition if the drivers raced in identical cars - preferably Ford Anglias!

And another thing - there's so much advertising tied up with F1. It's on the cars, it's on the drivers' suits and it's on their ridiculous post-race baseball caps. Some might think that the whole show is largely about promoting products and making money. They would probably be right.

They go round and round a race track over and over - their cars whining, their tyres breaking up. To me it isn't really a sport at all and if there was a referendum, I would vote to consign F1 to history. Having said that, I hope that Jules Bianchi comes out of hospital without the kind of life-changing effects that can accompany any brain injury.
- October 06, 2014