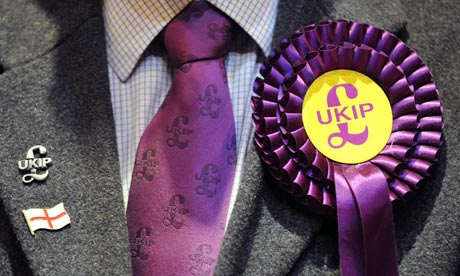 All my adult life I have voted Labour. It's as if my hand is controlled by unseen forces whenever I enter a polling booth. Even if the Labour candidate was called Mickey Mouse or Atilla the Hun, they would still get my vote. Well it had to be that way didn't it? Historically, Labour is the only party that ever did anything of note for ordinary working people and going back two generations I come from a family of coal miners and rabbit catchers, railway men and farm labourers. How could I forsake them by voting anything but Labour?

Last night there was a bit of a sea change in British politics when UKIP (United Kingdom Independence Party) gained their first ever seat in parliament by winning the Clacton by-election and at Heywood and Middleton in deepest Lancashire, Labour's victory over UKIP was by a worryingly slender margin. That constituency has always been staunchly Labour and the victory should have been a thumping good one as Labour are currently the main opposition party in our island nation.

What should we make of UKIP? Well to me they are a party with hardly any policies. They have a novelty value and their leader, Nigel Farage, has charisma and common appeal. He wants better immigration controls and he wants us out of the European Union so he's appealing to nostalgic and rather basic instincts. Frankly, it appals me that so many of my compatriots are being hoodwinked by this UKIP charabanc, embracing their newness instead of scrutinising their unwritten manifesto which has an insubstantial chameleon-like quality about it.

In my view, UKIP would have far less appeal for ordinary voters if Labour's leader was not called Ed Miliband. This awkward, nasally fellow has about as much charisma as a lump of lard. He is intelligent and he is caring but he simply doesn't have what it takes to lead the Labour Party effectively and demonstrate to disillusioned voters that it's time to return to Labour. He's like a rabbit caught in the headlights.

I wish the trade unions and Labour Party grandees had had the sense to see this reality before now. Miliband should have never been given  the nod and I fear that the party is sleepwalking into disaster in next year's General Election. Only when that happens will they ditch "Red Ed". Harriet Harman would have been better or Yvette Cooper, maybe even Andy Burnham or Chuka Umunna. We will be waiting a long time before Labour sweeps back into office with a clear mandate from the British people and that makes me sad for in the meantime we will have to suffer division and the crowing of media-inflated UKIP as it consolidates its undeserved and often offensive foothold in British politics.
- October 10, 2014