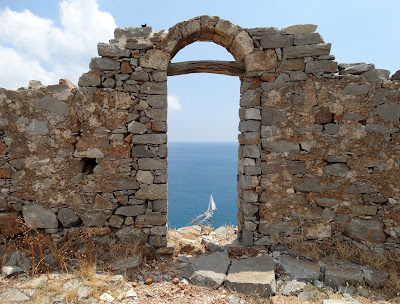 Spinalonga has become one of the main magnets for tourists in eastern Crete. Some of its popularity is no doubt down to the success of Victoria Hislop’s novel “The Island” which used the rocky islet as an enchanting backdrop to fictional events. Shirley said that she very much enjoyed the book though I haven’t read it myself. No doubt the majority of its fans have been of the female persuasion -whereas I am of course a rough-tough-machoman who prefers swashbuckling tales of piracy, sporting achievement and warfare. 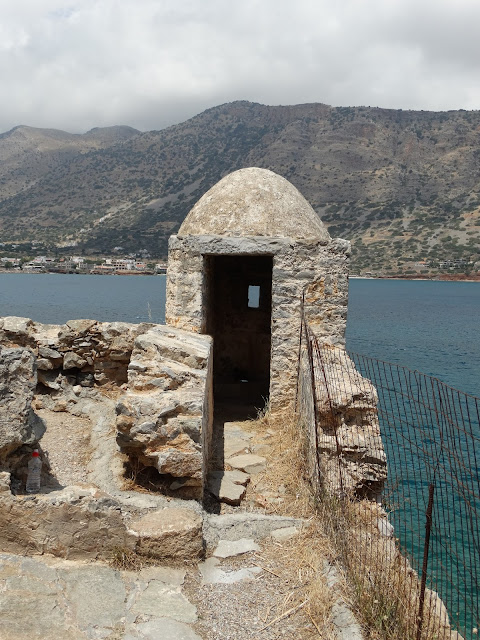 In our little Nissan Pixo hire car we headed up to the main highway and then twenty miles east to the outskirts of Aghios Nikolaus. The Grecian road signs were like a puzzle in The Krypton Factor but after turning round we mnaged to find the road to Elounda. Thence to the tiny port of Plaka where we parked and purchased boat tickets to the island. Eight euros each. 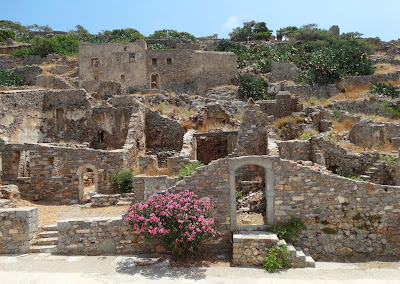 Aboard a converted fishing boat, accompanied by an array of other curious tourists, we headed out across the water and twenty minutes later we arrived at Spinalonga’s little wharf where there is a bronze statue to Captain Adrian the English mariner who, during a terrible storm, towed the diveboat there during the wharf’s construction in the late 1950’s. It was an act of unbridled heroism. 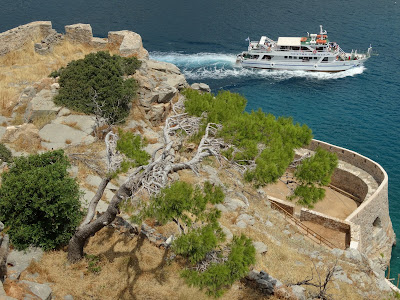 Spinalonga has a very long history – as an ancient fortress and as a refuge for Muslims. Then in 1903 it became a leper colony which accommodated lepers from every corner of Crete. That colony existed right up until 1957 when modern medical practice had largely eradicated the disease. The way in which Crete’s lepers were treated in the first half of the twentieth century is a testament to ignorance and irrational fear. They were plonked on Spinalonga far from their families and community support – just like prisoners – but the unfortunate lepers had done nothing wrong. 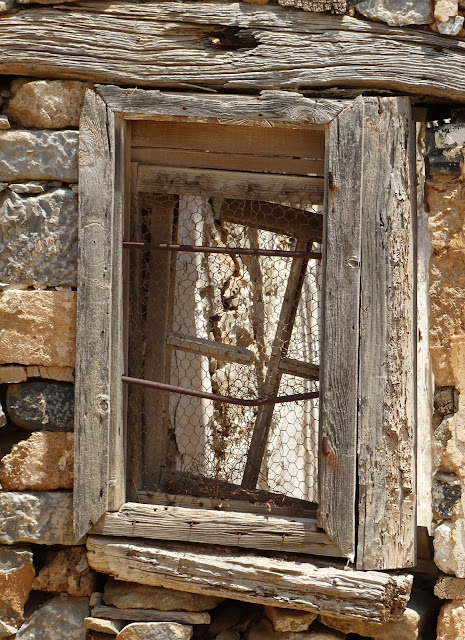 Baking in the sun, the little island is in a ruinous state. We wandered up to the crest of it and then circumnavigated it in less than fifteen minutes. If it could sing, it would sing a bitter-sweet lament – not just for the mistreated lepers but for the Muslim families who were expelled from Crete at the back end of the nineteenth century and no doubt – travelling way back in time there would be other deserving recipients of that sad song.
- June 23, 2015