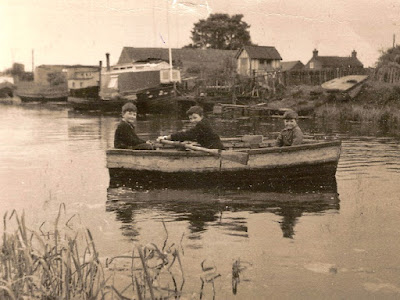 In the East Yorkshire village where I was born and raised there was a canal. Cutting across farmland for three miles, it linked my village with The River Hull which in turn headed down to The Humber. For over a hundred years the canal served two main purposes. It took agricultural produce down to Hull and brought coal, lime and building materials into the village. When the canal was cut in 1805, local roads were unpaved and goods were moved by horse and cart so the expense of creating this new waterway would have seemed like a worthwhile investment.

By 1960, when the photograph at the top of this post was taken by my father, Leven Canal was no longer used for commercial barge traffic. The lock gates that used to link it with The River Hull were in a sorry state of repair and no longer operational and the canal was becoming a little back water for leisure. There were several houseboats - at least two of which you can see in the picture - a couple of rotting wooden barges from the canal's trading past and anglers who would come from far and wide to fish for pike, roach and perch.

For village boys and some girls too, the canal was a tempting playground. We fished there, observed nature and "borrowed" rowing boats. Sometimes we swam amid the lilypads, hoping not to be attacked by those legendary monster pike fish. And when we became teenagers we romped there with our current sweethearts, hidden by the reeds and it was down by that old canal that I first tried cannabis that had been sprinkled in something called a "reefer". It made me feel very spaced out and slightly queasy.

The photo shows me on the right, big brother Paul rowing and next oldest brother Robin acting as the cox. Brother Simon is not present. He would have been three or four at the time and probably back at home helping Mum to beat her latest cake mixture. The picture reminds me of how fortunate we were to live such a happy, secure childhood in the heart of the East Yorkshire countryside. There were adventures to be had and the world seemed a joyous, explicable place. Just like the old canal, it appeared that we had far to go.
- March 28, 2016