Many moons ago, when I was an undergraduate at The University of Stirling in Bonny Scotland, one of my tutors was a relatively well known poet called Norman MacCaig. Born in 1910, he had a way with words and was unlike the typical career academics who staffed the Department of English Studies. His complexion was that of a lifelong whisky drinker and he had a faraway look in his eyes - as if longing for another place, another time.

One semester, along with a dozen other students, I had to visit his office every Thursday morning for a tutorial in which we would discuss the previous week's reading tasks. Norman MacCaig was of course the chairperson - leading, provoking, querying and generally pushing the debate along. However, he was not averse to sidetracks and once related a long and  funny story from his youth which had the entire tutorial group in stitches. It was a story with pauses, poetic turns of phrase, highs and lows and descriptive colour.

The following week we were all back at his office for the next tutorial in which once again he sidetracked and told us a long and funny story from his youth. But the thing was this - it was exactly the same story he had told the week before - complete with the same pauses, the same poetic turns of phrase and the same descriptive colour. Naturally, our response was muted on this occasion. We wondered how many times he had trundled the old story out. It was like a learnt monologue that had been honed and polished over the years. It made him seem even sadder.

But if the truth be known,  we all have stock stories that we roll out from time to time and perhaps we are all in danger of repeating Norman MacCaig's faux pas. Not every tale we tell as we journey through our lives is a once only account, never to be heard again and in the next blogpost I will relate one of my stock stories. 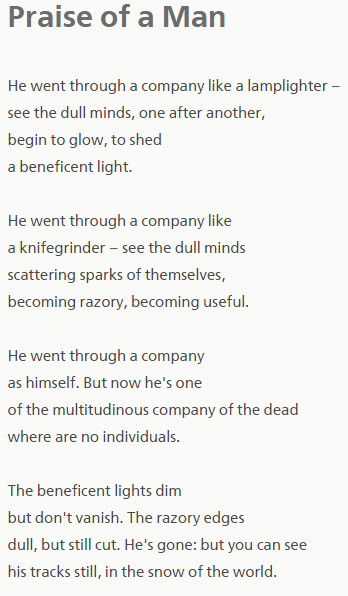