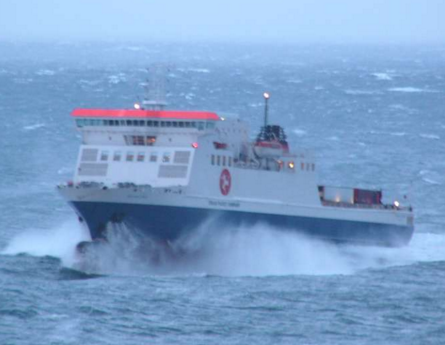 The good ship "Benn-My-Chree" was like a little cork bobbing across the Irish Sea. Rain was tumbling down like an endless series of waterfalls and the sky so thick with greyness that it felt that night was arriving far too soon. Aboard the little ship every single seat was taken in the passenger lounges so one naturally thought of the Atlantic slave trade and how terrible it must have been for those poor souls shackled below decks in cramped quarters, wondering if their voyages would ever end.

I am sure that several unkind bloggers with warped minds were praying that the "Benn-My-Chree" would sink to the inky black region where Davy Jones's locker is to be found - far below the salty waves where octopuses dwell. Such an event would have meant no more tedious Yorkshire Pudding blogposts to plough through!

To those unkind bloggers I have a news bulletin. We made it home safely! True there were traffic snarl ups in Heysham, Lancaster, Mottram and Glossop but I managed to keep control of my frothing temper - even when we were following a horse transporter over The Snake Pass. It was travelling so slowly I thought that horses were in fact pulling it.

Home now in Merry Olde England where (Mrs Meike Riley please note!) through the magic of television, I have just watched our football team beat Germany by three goals to two. We enjoyed our week on The Isle of Man but it is unlikely we shall ever go back. There are so many other places to see before we die but I am sorry to inform those unkind bloggers that such a morbid event is not planned for the foreseeable future.
- March 26, 2016