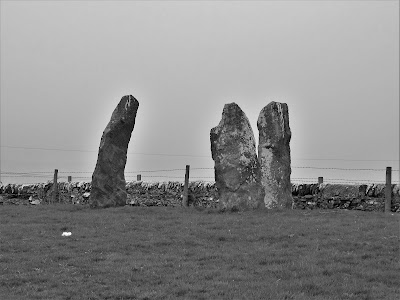 Yesterday, here on The Isle of Anglesey, we visited a little church that was first established in 440 AD. Imagine that! It is certainly one of  the oldest British churches I have ever seen.

But go back in time. Much further back. This island is home to many tantalising ancient sites dating back 4000 years or more to The Bronze Age and even back beyond that.

It was a rather grey day while England and South Wales were apparently bathed in yet more bright spring sunshine. We pottered around Cemaes Bay on the north coast where a happy old spaniel called Morgan adopted us for an hour or so. Then we headed inland to the village of Llanfechell.


We were going there specifically to see The Llanfechell Triangle - three standing stones dating back to The Bronze Age. They are each over six feet tall and sit on high ground looking out towards yet more ancient hilltops.

It was a struggle to get there. No footpath signs and the path up to the ridge was not well-trodden. We were glad we had donned our walking boots as the sheep pastures were squidgy underfoot. But then we reached them. It was as if they were in conversation.

Nobody is sure what these standing stones were for. They may have had a spiritual significance or perhaps they were the upright struts of a tomb that was once capped with a large horizontal slab like a dolmen. Whatever they were for it would have taken great determination and togetherness to erect them.

I am fascinated by ancient history and as I stroked those stones I did so with reverence, sensing the invisible lines that connect all humanity back through the ages. Once there was another world where the wind blew in from the sea and the jewels of the sky above were like signals explaining the nature of things if only you could unlock the universe's secret code. And there our ancestors walked feeling the rain upon their cheeks, observing the plants of the earth and sometimes standing in wondrous silence when rainbows arched over the untamed landscapes they knew. 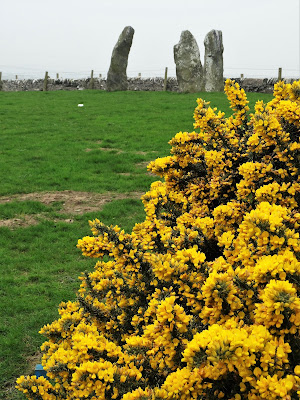