Over the years I have brought plenty of stones home - from the top of Ben Nevis to California, France, Greece  and the west coast of New Zealand. When I look at them, they remind me of those places and of course that is what souvenirs are meant for - to remember.

Earlier this week, Shirley and I were on Porth Trwyn beach on the west coast of Anglesey. We had gone there to watch the sun go down but Shirley picked up another souvenir to add to our collection:- 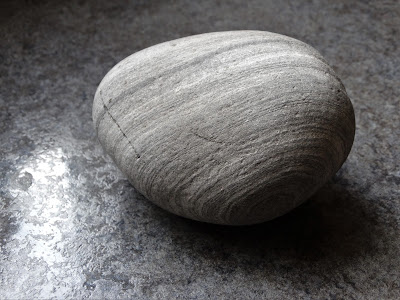 Beach stones are beautiful. They are of The Earth but smoothed by the ocean over hundreds, perhaps thousands of years. This one has distinctive layers that speak of some ancient sea or riverbed - millions of years back. If only the stones could speak to us, revealing their stories.

The town of Holyhead on Anglesey knows poverty. Not every home of course but in Holyhead the poverty is clearly visible. It seems a rather sad place on the very edge of Britain, looking bleakly over the Irish Sea. There are several  charity shops  there and half of these were jumbled, odorous places selling stuff that would never make the shelves in the Oxfam shop where I work each Wednesday. In poor towns the quality of donations will naturally fall.

We went into a scruffy little antiques shop on Market Street and there we spotted a box:- 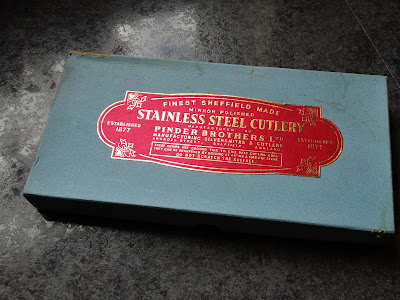 Yes it was from our home city which used to be synonymous with good quality cutlery. Many sets of Sheffield cutlery or knives were given to couples as special wedding presents and because they were top quality items they were often stored in cupboards and never used. They would remain there for decades.

Anyway, the second souvenir we brought home from Anglesey was the set of dinner knives we discovered in the box. In pristine condition and only £20 - ready to transport back to the city where they were made. And we shall definitely use them. Living in this city of steel it would seem wrong to use any cutlery that wasn't made here. 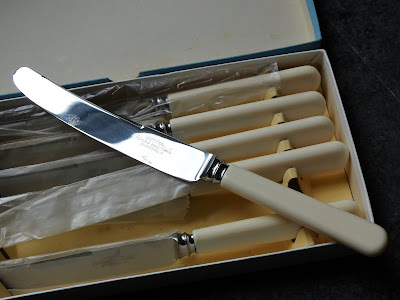