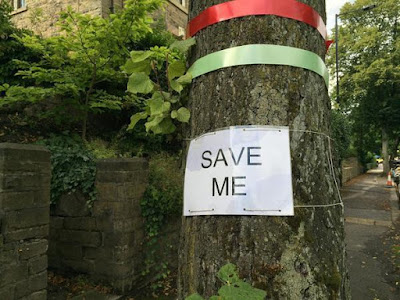 Surprisingly, Sheffield is the greenest city in Great Britain and one of the greenest in Europe. If you could view the south of the city from a summer sky you will be surprised by how many trees line our streets and valleys. This should be one of Sheffield's proudest boasts, along with the fact that football was invented here and yet the city council seems determined to keep such information secret from the rest of the world.


Living in modern times we are meant to pay homage to free trade and private enterprise. Cash-strapped city councils have had to farm out services to private companies. In Sheffield, the maintenance of our streets used to be the sole responsibility of the council's Works Department but nowadays it is mostly undertaken by a private profit-oriented company called Amey. With massive government funding they are currently involved in a long term project known as "Streets Ahead" - supposedly to improve the urban environment. 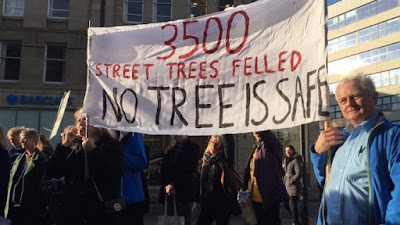 As a feature of their "Streets Ahead" scheme, Amey have been chopping down a lot of mature trees, claiming incorrectly that they are all dangerous and diseased. In place of these lovely green giants they generally plant puny little saplings which are staked to the ground and would take many decades to mature into lofty trees if indeed suitable varieties were being selected.

There have been many protests about the felling of our trees. Some people have been arrested and many trees earmarked for destruction have been dressed in yellow ribbons and protest posters. Often Amey have arrived unexpectedly  to chop down trees in the early hours, disturbing residents and arranging costly police protection ironically at council tax payers' expense. To me the bottom line is that Amey are not keen on pollarding our mature trees or pruning them. This process can be quite costly and of course such annual servicing would reduce Amey's profits.

Last night, when knee pain disturbed my sleep, I had the idea of writing a protest poem which I plan to send in to the local newspaper - "The Star". Perhaps they will publish it and it will add a little extra support to the campaign to save our trees. Anyway, just this morning, I wrote it instead of taking a shower. Here it is:-

From above, the city looked green
So many trees - such a marvellous scene
Trees to filter the fumes from the air,
Arboreal beauty everywhere.
Our City  of Steel was a City of Trees
With songbirds hidden amongst the leaves
Then Amey arrived with their corporate silence
Basing decisions on  pseudo-science.
To pollard or prune would reduce their profit
Though tax paying Sheffielders cried “Come off it!”
The vandals arrived in  the early morning
Dressed in hard hats without any warning
With safety glasses that hid their eyes
And Hi-Viz hoodies to complete the disguise.
On their backs they’d stamped “Streets Ahead”
But surely  this legend should have read
Something different like “Streets Behind”
For such was the vision they had in mind
A city of saplings and wooden stakes too
Bashed  into our streets where giants once grew.
- April 03, 2017