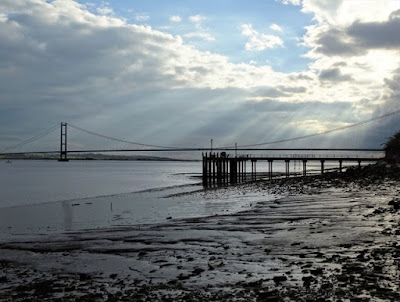 I'm starting to think about painting landscapes. See the photograph above. I took it from the northern shore of The Humber near Hessle Haven. Beyond the old jetty you can see The Humber Bridge arching gracefully across the river. It was opened in 1981 and at that time was the longest suspension bridge in the world. It remains an iconic structure linking Yorkshire with northern Lincolnshire.

I have travelled across it many times but when I was a schoolboy in Hull, the only way we could get across that mile-wide river was by steam ferry. Lincolnshire was a faraway world like Narnia, inhabited by strange folk known as Yellowbellies. Little did I know back then that I would end up marrying a Yellowbelly!

Below I have used picture effects in "Word" to create a new version of the picture in which only a handful of shades have been used in what is called a "cutout" style. I think it is handy to have a look at the picture this way because it helps to overlook superfluous details and get right to the heart of the picture's basic structure and the different layers of light and shade. 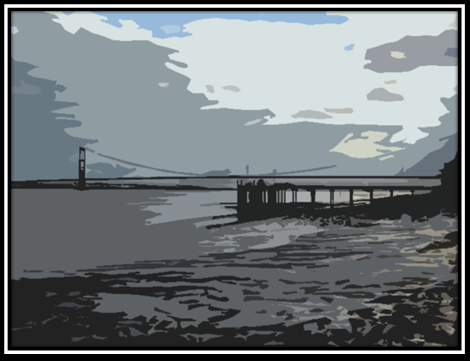 Perhaps I should have checked out this version before my first attempt at the composition. I am not happy with what emerged. Sometimes I can be far too timid with my use of colour and I know that I need  to force myself to be bolder. Anyway, this was my first attempt:- 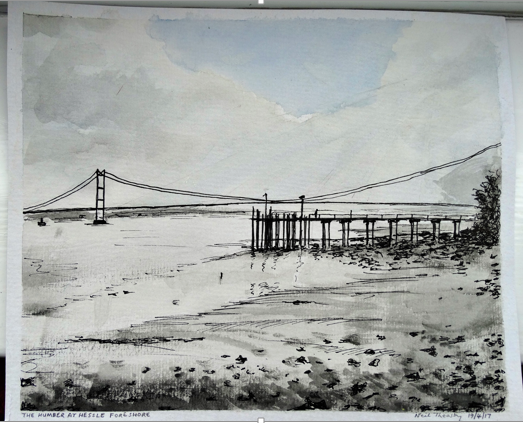