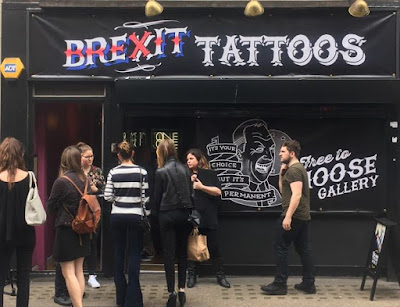 I dislike the word "Brexit". It reminds me of idle word collisions in very unsubtle brand names such as "Weetabix" or "Kwikfit". The word "Brexit" seems to belong in the commercial world of "Toys R Us", "GameStop" and "Supasave".

I find it rather trite and shallow, turning a process of immense importance and national concern into the kind of word you might find in a cartoon bubble. There's a cruel disconnect in my view.

The word "Brexit" was first coined on May 12th 2012 by a fellow called Peter Wilding who heads up a pressure group called "British Influence". He was pushing for a "Remain" vote so it's rather ironic that his gift to The Oxford English Dictionary is a word that was embraced by so many "Leave" voters and repeated time and time again in Britain's tabloid press.

And then you had our great leader Mother Theresa, ponderously defining the word in a mystical incantation... "Brexit means Brexit" which was like saying that "Cheese means cheese" or "Bollocks means bollocks". If she had wished to be totally honest with the British public what Mother Theresa should have said was "Brexit means what I think it means".

In my opinion, there should never have been a Brexit referendum in the first place. To reduce the whole complex web of Britain's associations with Europe down to a simple "Leave" or "Remain" vote was like dumbing down the story of someone's life to a verdict of "Good" or "Bad".

In the confusion that has followed the Brexit vote, it becomes clearer each day that the original question was insufficient. If we were going to have to have a referendum, there should have been other questions resulting in clear choices to guide negotiators beyond the fateful day.

And finally, I just want to mention Russia. I am not someone who readily embraces conspiracy theories but it seems to me that The British establishment have been smothering or playing down reference to Russia's influence on the Brexit referendum. Russia clearly  played its shadowy hand in the US presidential election and several serious journalists and other well-informed  observers firmly believe that Russia also influenced Brexit voting. Go here and here and here.

But regarding that troubling matter, the British public are left to watch the rolling of tumbleweed while listening to the eerie sound of silence..."Brexit means Just Shut Up and Eat It!"
- April 25, 2017