Before the flight to Carcassonne, Shirley and I stayed overnight in a rustic B&B in the Essex village of Broxted. It is just three miles from Stansted Airport and directly beneath the flight path for incoming aeroplanes. The noise of their engines interrupts conversation if you are talking outside.

We donned our walking boots and enjoyed a long, circular ramble that took in two ancient churches - Broxted's parish church - The Church of St Mary and the disused Church of St Mary in the tiny hamlet of Chickney.   Confusingly, they both have the same name. It was late afternoon, melding into the early evening and the end of a proper English summer's day. 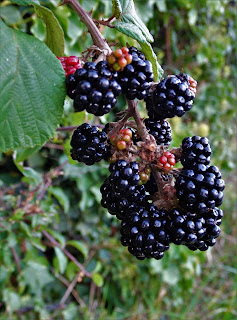 There were brambles in the hedgerows and in the distance a combine harvester worked its way through a field of ripened wheat. We discovered that Broxted church has a special significance for our nation's three most famous former hostages - Terry Waite, Brian Keenan and John McCarthy. They were present to witness the unveiling of two modern stained glass windows which are known as The Hostage Windows. For a long time McCarthy lived next to the church.

It was nice to find the other church - the Chickney church open to visitors. Services haven't happened there for many years and the wooden pews were coated with a film of dust. I observed two Saxon windows that proved the main part of the building dates back over one thousand years - to distant times before the Norman Conquest. It was very atmospheric.

After our ramble, we went for dinner in the nearby "Prince of Wales" pub. Homemade steak and mushroom pie with fresh vegetables, mashed potato and gravy - all washed down with Black Sheep bitter.
On Saturday morning we had breakfast round the kitchen table in Church Hall Farm. It was a very quirky room with oak beams and a character that had evolved through the years. We were joined by a young couple from Luxembourg who were over in England to watch a motorcycle grand prix at Silverstone.

After breakfast, we packed up ready for our short drive to Stansted and the flight to France but perhaps more of that tomorrow...
- August 31, 2017