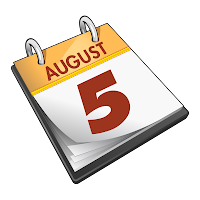 It's August 5th. My father, Philip, was born on this day in 1914. It was the day that our newspapers first announced that Britain had entered World War One. He lived for sixty five years, enjoying just one year of retirement before he suffered heart failure and died. If he were still alive he would have been 103 years old today.

It's August 5th. My oldest brother, Paul Philip, was born on this day in 1947. He lived for sixty two years, dying peacefully in his sleep one workaday morning in 2010. He never got up for work again. They say it was a previously undiagnosed heart problem that got him but I think it may have been a blood clot related to a hip replacement he had to have following a fall at work two years before. He would have been seventy today.

It's August 5th. My son Ian Philip should have been born on this day in 1984 but he decided to enjoy the comfort of his mother's belly for another eight days before his joyous arrival into our world. Ian is still very much alive and looking forward to the publication of the "Bosh!" plant-based recipe book that he and his mate Henry have been working upon like Trojans in the past three months. He will be 33 years old next weekend.

These are the three men that have meant the most to me. All special and gifted in their own ways. All three - lovers of life. I think about each of them every day.
- August 05, 2017