In the B&B, I came downstairs to a delightful fried breakfast followed by a freshly prepared fruit salad. The woman who runs the place is an artist. Her pictures are displayed on most of the walls. Her black Labrador drooled as I ate my last chunk of sausage. She wasn't getting any of it.

The morning was glorious and soon I set off for Sandgreen along a quiet lane. Checking my Ordnance Survey map, I stopped occasionally to take pictures such as the following:- 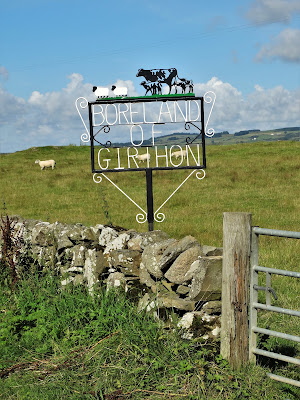 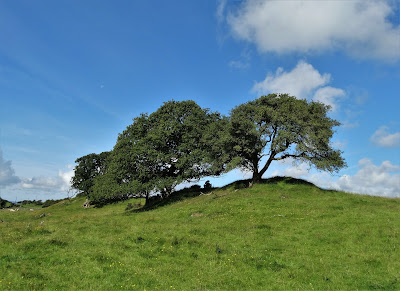 But very soon I reached Sandgreen where I looked out over Airds Bay:- 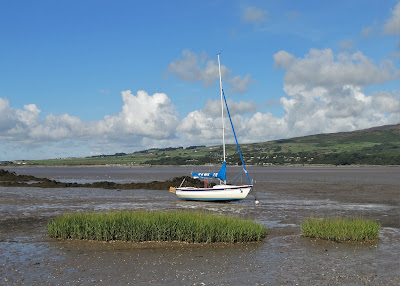 From there I backtracked - this time heading to Knockbrex and Carrick. The tide was out so I donned my walking boots and set off over the tidal flats to uninhabited Ardwall Isle. The ruins of a chapel were marked on the map but I couldn't find them. I think they were hidden by undergrowth. I walked to the west of the little island and looked north to Murray's Isles:- 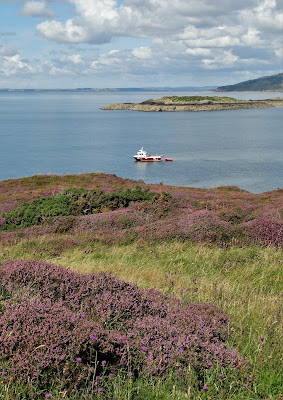 To the west of  Knockbrex Hoiuse I had noticed some strange pillars protruding from the rocks. In past times, they guided boats into the estate's little harbour. With difficulty, I made my way along the rocky foreshore to photograph them:- 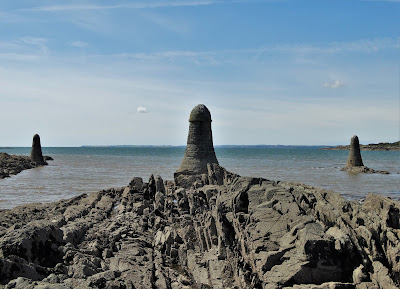 Back in Clint, I travelled eastwards towards Borgue where I attended the village's summer fair and won two bottles of beer. I also had a pint of: bitter shandy in The Borgue Hotel:- 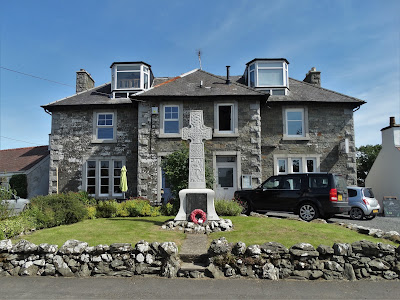 My next destination was Ross. It's a hamlet near the entrance to Kirkcudbright Bay. I had spotted it when studying my map back in Sheffield. I wanted to walk round the little peninsula south of Ross Bay to see the island of Little Ross with its lighthouse, beacon and harbour house. It is currently up for sale and the starting price is just £350,000 though bidding may well push it up to the region of half a million or more.

On the foreshore I noticed an old caravan with a large Scottish flag fluttering over it.  By chance I met its occupants - Tommy and Margaret from Glasgow. Both in their seventies, they had been visiting their caravan (American: trailer) for over thirty years. Margaret was about to go swimming in the bay. We spoke about happiness, Brexit and Little Ross and Tommy explained how to circumnavigate the peninsula:-
By the end of this little walk  it was almost five o' clock. I headed up the western side of Kirkcudbright Bay, stopping only to spend ten minutes at Dhoon Bay:- 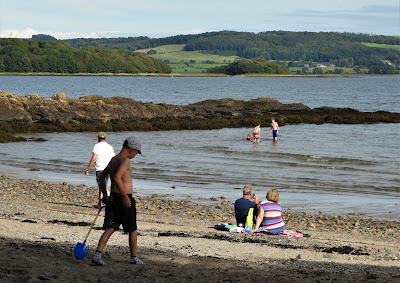 Then Clint and I drove on - back To Kirkcudbright. I was thirsty and quite hungry. I went into "The Steam Packet Inn" for a pint of Deuchar's bitter. There I met a local man called Jack. He had worked as a fencer for forty years - not waving swords, but building fences. He showed me his free bus pass which he had collected the day after his sixtieth birthday the previous week. He seemed confused that I, as a sixty three year old Englishman, am still not entitled to a senior citizen's bus pass. There are different rules in Scotland and some of them seem most unfair.

I enjoyed a tasty fish and chip supper in the nearby "Polarbites" fish and chip restaurant and afterwards spent an hour chattering with a couple of seniors who are touring southern Scotland in their new camper van. They even invited me inside to show off the interior of their vehicle.

I didn't make it back to the B&B till ten thirty. There was a note on the door asking me to lock up. Behind the kitchen door the malodorous black Labrador woofed a greeting as I mounted the stairs to watch football highlights on the little TV set in my room. It had been another wonderful day, exactly thirty three years since our lovely son Ian was born.
- August 18, 2017