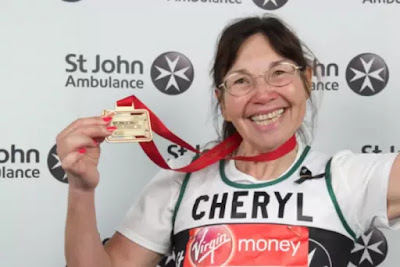 We were sitting in Fisher's fish and chip restaurant in Hunstanton when Shirley believed she'd spotted a familiar face. When this woman got up to leave I saw her approaching our table and blurted out, "Excuse me. Are you Cheryl?"

It was indeed Mrs Berry who had been the headteacher at my son's secondary school throughout his time there. She departed from that school round about 2001, just before our daughter went up there.

Now Mrs Berry was an unusual headteacher in that she was universally admired and respected by pupils, parents and staff alike. I remember an interview with her in the Sheffield "Star". She said that she liked to be outside her office during the school day, meeting children, talking to staff, visiting lessons. She also taught one class Mathematics every school year. Any office work she needed to do would happen when the school day had ended.

I know for a fact that this wasn't an idle boast, designed to impress because in the early nineties I had occasion to go up to that school every Monday evening and I would always see Mrs Berry beavering away in her office until perhaps eight thirty or nine o'clock.

You should understand that this was a school with a pupil population of around 1800. Being the leader of that school was like being the leader of a significant business venture. Every day brought new problems to solve, new demands on Mrs Berry's time. But she remained cheerful and approachable, refusing to surround herself with mystique or bloated self-importance like many other heads of secondary schools.

Now here's the thing. On Wednesday night she asked what our son's name was and we told her. She said that of course she remembered him but she didn't add any follow on information to confirm that knowledge.

Afterwards, I thought - how could she remember him? He was an ordinary boy who attended school every day and was never bothersome. During Mrs Berry's ten years at the school she would have been in charge of over 4500 students and hundreds of members of staff. How could she possibly remember our Ian?

As you may recall, I was an English teacher myself and every year I taught around two hundred pupils in different classes. I saw these children for four hours a week and yet if I met one of those children's parents today it is highly unlikely that I would remember ever teaching their now grown up child.

It left me wondering if Mrs Berry always claims to remember former pupils that she chatted to in the school's corridors or engaged with ever so briefly in classrooms. Perhaps she realises it's what parents want to hear - remembrance. "Yes - I remember your little darling" and not "No - 4500 pupils passed through the school in my time. How could I possibly remember your child?"

However, I should remind myself that Cheryl was and is a remarkable human being. After leaving the local secondary school she went on to do a variety other demanding jobs and even received an M.B.E. for her services to education and young people. Maybe she did remember.
- September 16, 2017