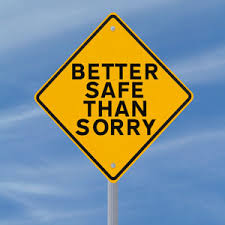 Yesterday, a human interest news story was kicking around the airwaves in Britain. Essentially, a couple of interested "experts" were saying that tackling should be banned when boys or girls are playing rugby at school.

Indeed, tackling during school rugby matches or practice sessions can certainly result in injury. Every year a handful of schoolchildren incur serious injuries whilst playing rugby - injuries that might even put them in hospital or worse still, in wheelchairs. I guess I was just plain lucky. I played rugby regularly between the ages of eleven and eighteen and never suffered a single injury worth mentioning in all that time. I loved rugby - the exercise, the camaraderie, the strategy and the weekly battle to beat the opposition. In my humble opinion, if you took tackling out of rugby it wouldn't be rugby - it would be something else.

Wouldn't it be great if we could eliminate all danger from the lives we live? Reduce the possibility of accident to a bare minimum. To complement the appeal to ban tackling in school rugby, I have come up with the following five proposals:-
1) All staircases to be made from foam rubber so that if people fall, the possibility of injury will be massively reduced. Where feasible, a pit filled with foam rubber blocks should be placed at the bottom of every staircase.
2) The eating of fish should be banned as fish contains small bones that may cause choking and possibly death. In my experience even filleted fish can contain stray bones so filleted fish ought to be included in the ban.
3) Dog ownership should no longer be allowed as every year thousands of people are admitted to hospitals following dog attacks. There isn't a year that passes by without a few people being killed by dogs. This has to stop. To fill the void dog owners can have cats or hamsters instead.
4) In winter when it's icy outside, it should be illegal for senior citizens to step outside their front doors. They must stay safe inside because icy pavements (not sidewalks) cause so many injuries and broken bones each winter. Statistics show that old people are significantly more vulnerable than younger folk.
5) On our nation's roads a speed limit of 15mph should be instituted right across the country - on urban, suburban and rural roads as well as motorways. This will almost eliminate  road traffic accidents and thereby pave the way for an astonishing fall in the number of road deaths we see each year.

Have you got any other safety proposals you would like to bring to the table?
- September 27, 2017