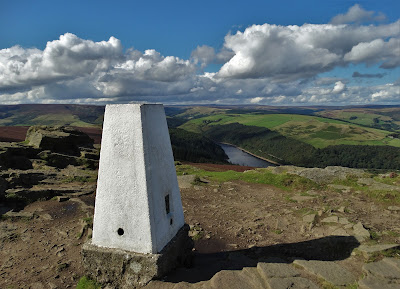 Yesterday, I scaled Win Hill once more. I hadn't been up there for twenty five years even though it has figured in plenty of my photographs of The Dark Peak.

I parked by The River Derwent near Yorkshire Bridge and began the steep three hundred metre climb through the woods up Parkin Clough. Following recent rain, the roccky path was slippery so I took my time. Apart from anything else I needed to protect my right knee and avoid a tumble. I contemplated descending via the same path and vowed to take a different, more gentle route back down - even if it was going to be longer. 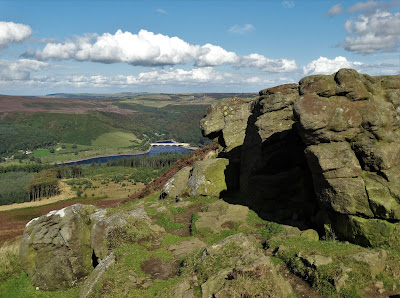 One Sunday afternoon twenty five years ago, when Shirley was working at the hospital, I climbed Win Hill with my children - then aged four and nine. I took pictures of them sitting on the triangulation pillar you can see in the top photo. In those days nobody owned digital cameras and the internet was in its infancy. I still have those two pictures. They are in frames, sitting on the window sill of our landing window and as each year passes the images become slightly more faded - as if the colour is gradually being leaked out of them. 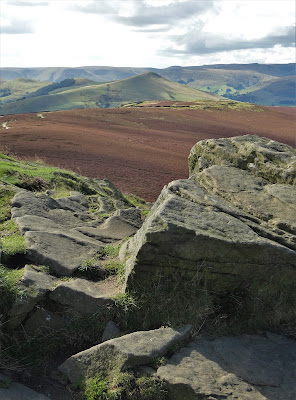 In the picture above, I am looking from the summit of Win Hill to the conical summit of Lose Hill. Between these two hills a lane links Edale with The Hope Valley. A legend says that in ancient times, before the idea of a country called England had been conceived, Win Hill and Lose Hill accommodated two warring tribes, battling for territory. The winners occupied Win Hill and the vanquished were at Lose Hill. It's probably just a fanciful tale.

Below, I have just reached the rocky summit, looking towards the triangulation pillar. The views from Win Hill are tremendous. It's a 360 degree panorama which includes The Hope Valley, Stanage Edge, The Derwent Valley and open moorland beyond which lies Cottonopolis - the fabled city of Manchester. I sat up there for ten minutes, taking it all in as a stiff breeze ruffled my hair and whispered that winter is on his way. 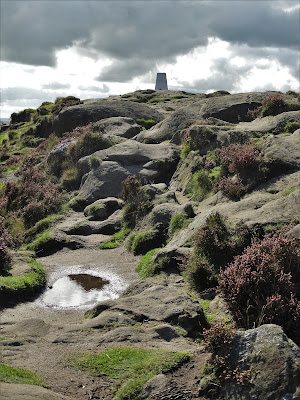