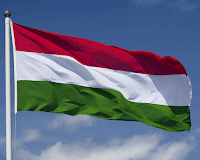 In the summer of 1989, I volunteered to be a summer school English teacher under the aegis of The British Council. My destination was Hungary.

The summer school took place by the shore of Lake Balaton, a vast inland lake about fifty miles south west of Budapest. My tutees were all students at The Technical University of Budapest which like many other large Hungarian organisations owned a sort of holiday-cum-conference compound by the lake.

This was the summer before TV showed images of happy Berliners hacking away the concrete. Later that same year and into the early months of 1990 we were to see the historical transformation of those old Iron Curtain states but in August 1989 it was same old same old.
The lake was lovely and warm. You could swim in it all day if you wanted to and if you could bear the mysterious muddiness beneath your feet. Half a mile from the university compound I discovered a campsite amidst the pine trees and virtually every vehicle there had come from East Germany. Did communists have camping holidays? Did they barbecue sausages and play volleyball? Did they laugh? Yes dear reader, it seems that they did.

One day, I had a ride in a mustard-coloured Trabant. It was proudly owned by one of my Hungarian teaching colleagues. I was in the back and in spite of myself I had a fit of giggles. The very idea of being crammed n the back of a Trabant as it coughed and spluttered its way along a windy Hungarian lane really tickled me for some reason. But I knew I shouldn't laugh because acquiring any kind of motor vehicle in Hungary in those days was a big deal. Understandably, my colleague was quite proud of his ill-designed East German car. He had waited more than three years to buy it on a paltry salary that made me look like a millionaire. 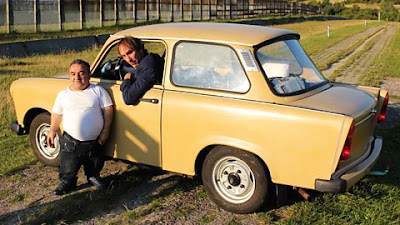 One day I met two children at a cafe. They were perhaps nine and eleven and surprisingly spoke enough pidgin  English for basic communication between us. Of course this was in the days before paedophilia came along. They took me through the dappled woods to a hidden rock face and there they showed me a little-visited cave that had been cut into the limestone some hundreds of years before. There were sleeping platforms and a fireplace area and tantalising images scratched upon the walls. It was very possible that this cave was prehistoric. I felt privileged to be in such a place.

One night after I had been drinking beer with a bunch of East German students at a lakeside bar,  I was approached by two furtive men. They wanted to know if I had any British or American money they could buy from me. One of them opened his wallet and showed me a huge wad of foreign currency. It was now close to midnight and very few people were around. Suddenly, I had an overwhelming premonition that they were about to mug me. They were just too pushy and besides what was in this shady deal for me? Nothing.

I indicated I needed to use the toilet and as soon as I got round the corner  I ran like the wind along the woodland track that led back to the safety of the lakeside compound. Christ Almighty, I couldn't run like that these days but I should remind myself that twenty eight years have passed by. The wall came down and countries like Hungary became "free" at last - whatever that might mean.
- September 07, 2017