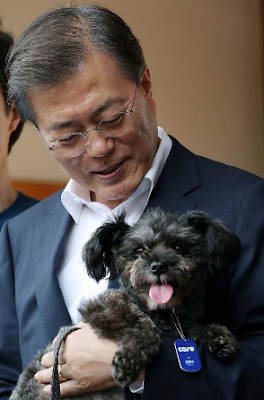 Above - it's the new South Korean President Moon Jae-in with his rescue dog - a four year old  cross-breed called Tori. The President has another older dog called Maru and a stray cat he adopted called Jing-jing. The image suggests that Koreans really do love dogs... and not just on their plates.

In recent years there has been a marked decline in the consumption of dog flesh in South Korea. At the same time there  has been a corresponding growth in the ownership of pet dogs and a shift in attitudes towards dogs. President Moon Jae-in has been happy to promote a more westernised relationship with dogs even though it was always the case that thousands of Korean families had pet dogs in their homes.

To the majority of Muslims the very idea of eating pork is horrendous. To millions of Hindus the thought of eating beef is outrageous. According to legend, the French eat snails and frogs' legs all the time. One's meat preferences are frequently linked with one's particular cultural heritage.

British people are generally averse to eating horse but viande-de-cheval is widely available in French supermarkets along with animal brains, eyes, lungs, hooves and trotters. The British have forgotten the potential culinary joys of such products and even turn their noses up at liver and kidneys these days.

Here in the blogosphere there are many dog lovers. People often blog about walking their dogs, taking them to the vet's or even sleeping with them. However, dog ownership has never appealed to me. My family didn't have dogs when I was a child and frankly I don't see the point of them unless they are being used to round up sheep, guard property or sniff out drugs.

You have to walk dogs, clean up their faeces and feed them. It's not for me and another thing - dogs smell. Dog owners may become accustomed to dog odours but those of us who live in dog-free homes can usually detect the sickly aroma of dog when we enter a dog  owner's home. The level of smelliness will depend on the size and  number of dogs in the home, diet, gender, the age and breed of the dog and how often the dog is shampooed.

No wonder that my father-in-law - who was a Lincolnshire farmer - kept his two working dogs in a kennel or locked up in the barn. He loved those animals but never wanted them in the house.

I realise that in expressing my latent aversion to dogs I risk being pilloried by dog owners everywhere. They are a fearsome lot and what is more some of them snarl and bite. I'm talking about the owners, not the dogs!
- September 22, 2017