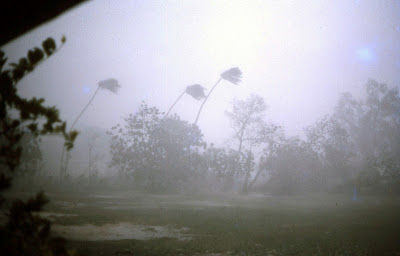 Once, long ago, I was in the middle of a hurricane. It brewed itself near the Gilbert and Ellice Islands and then moved southwards across the South Pacific Ocean. I listened to Radio Fiji, gradually becoming aware that the hurricane was moving in our direction.

I was a VSO volunteer teacher, living in a sturdy little government house in the village of Motusa on the island of Rotuma - with my American Peace Corps friend Richard. I alerted him to the news. It seemed surreal to imagine that a hurricane was on its way when  the sun was shining and the coconut palms that fringed our island were hardly swaying in the slightest of sea breezes.

I had arrived on Rotuma only seven weeks before. It had taken three days to get there by boat from Suva which is the capital of Fiji,  Rotuma being the most northerly of Fiji's many islands.

It was as if I had arrived in paradise. Boys shinned up the palms to knock drinking nuts down as domesticated pigs frolicked in the crystal clear sea by the long white beach at Mofmanu. There were no tourists. Robert and Mojito brought us fresh paw paws and fish that they had speared on the edge of the reef. There was an aroma of roasted copra in the air and frangipani, hibiscus and orange blossom and always the sound of the ocean meeting the reef. 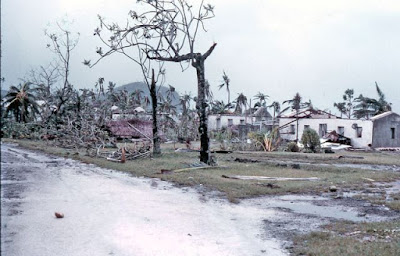 The day before the hurricane struck, I learnt that it had acquired a name - Hurricane Bebe and now the Radio Fiji announcer was warning that she was likely to cross Rotuma. It was time to prepare. The weather was beginning to change and the calm ocean was starting to churn. We warned all of our neighbours to get ready. There were no telephones and most of them didn't possess radios. For decades Rotuma had avoided hurricanes and only the oldest islanders could dimly remember a similar event.

It was on the morning of October 22nd 1972 that the full fury of Bebe struck our village. The air was thick with driven rain and the wind roared like a mighty beast. We looked out of our window across the primary school field towards the ocean. Thank heavens for the coral reef. It was protecting us from mountainous waves. But as the strength of the wind reached its peak at around 130mph we saw rooftops flying - sheets of corrugated iron and planks of wood and woven palm thatches.

Our house was shaking on its concrete foundations and we feared that we would also lose our roof. Several villagers who had lost their houses rushed to our place for sanctuary.

For an hour or so, it seemed that it would never end but then the hurricane began to subside. Soon we found ourselves in a deathly calm. The eye was passing over us.

Richard grabbed his camera and we wandered out in the stillness. Many coconut palms had been uprooted or stripped of their leaves. The nearby methodist church was roofless as were virtually all the self-built houses in the village. This was no longer paradise. It was a scene of cruel devastation. 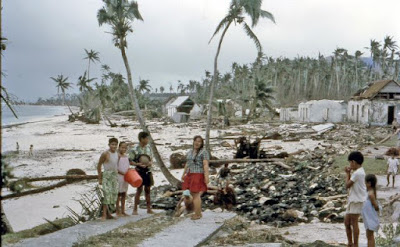 We were in that silent eye for perhaps forty five minutes until the wind started to pick up again. But when it came back it was far less fierce than in the first assault.

Quite a few people were injured that day and a woman was killed in a village called Pepjei on the island's southern coast.


It was several days before any help arrived from Suva and weeks before a team of New Zealand soldiers arrived to build dozens of prefabricated new homes. In the meantime, people helped each other and began to pick up the pieces of their lives - both literal and metaphorical.
All pictures by Richard J. Mehus (1947-2012)
- September 10, 2017