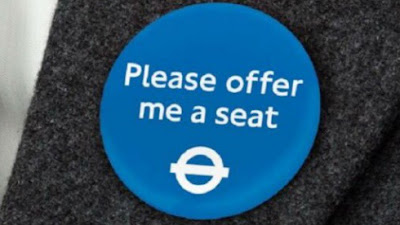 On Saturday morning, we visited Westminster Abbey. Afterwards, we strolled to Leicester Square and boarded a tube train on the Piccadilly Line, heading back up to Wood Green where Princess Pudding now lives with her consort. The carriage was pretty full but Shirley managed to bag herself a seat.

If you will pardon the expression, she was sandwiched between two young men. However, almost immediately one of them stood up to offer me his seat. This was a milestone moment in my life for never before have I, as an ageing man of sixty four, been offered a seat by a younger human being.

The young man noticed my amusement and explained that in his "culture" it was the done thing to show respect for one's elders. A stop later he was able to sit down opposite me and we had a brief conversation.

I asked about his "culture" and he said he was from Senegal. We spoke about the weather there and how hot weather can make one lazy. He said that the best time to visit Senegal was in January and February when most days lacked the oppressive heat people endured in the long tropical summer. He also referred to the difficulties of sleeping in hot, airless rooms without air-conditioning.

What a fine young man he was. Polite and pleasant as his original kind gesture had shown. I shook his hand and wished him well. I guess we had broken the unwritten underground railway code - never converse with strangers.

No doubt the young man  had come to England to seek a better future and despite the fact that he made me feel like an old fart when he offered me his seat, I still hope that he finds that better future and avoids being crushed by disillusionment and dead ends.

By the way, Senegal is situated on the west coast of North Africa. It has a population of some 15 million people with its capital city being Dakar. Once part of the French Empire, 92% of Senegal's people follow Islam. God knows why. Here is the translated first verse of the Senegalese national anthem:-
Sound, all of you, your Koras,
Beat the drums,
The red lion has roared,
The tamer of the bush with one leap has rushed forward
Scattering the gloom.
Light on our terrors,
Light on our hopes.
Arise, brothers, behold united Africa!
- April 23, 2018