Yesterday, my silver friend Clint carried me beyond Doncaster. I was heading for the flat lands north of that historical South Yorkshire town. It is not an area I know well and in fact yesterday's planned walking route was all in virgin territory - though I didn't spot any virgins apart from the spring lambs shown in the picture above. I parked in the sleepy village of Thorpe-in-Balne where there are several new houses of manorial proportions. They had wrought iron gates and CCTV warning signs. The old village must have been very small indeed, dominated by a moated manor house dating back to at least the twelfth century.

I set off and soon found an imposing highland cow guarding the public footpath. I had to nip over the adjacent wooden fence to avoid this horned creature with its ginger Beatles fringe. Then through the fields to the even smaller village of Trumfleet. 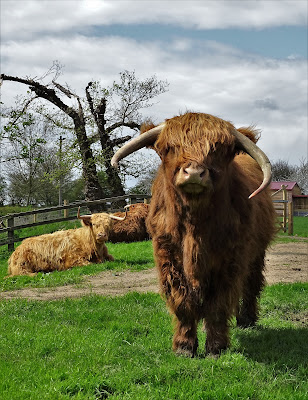 The landscape is criss-crossed with drainage channels and the area is vulnerable to flooding. Some of my trudging was on very quiet single track lanes rather than upon cross country paths. I diverted to Wrancarr Mill where an Alsatian in a pen barked at me like The Hound of the Baskervilles. Thank heavens for wire fencing.
My intended route was a big six or seven mile circle. I knew I would have to cross the main Doncaster to York railway line but that was okay because my map showed two public rights of way crossing the railway tracks near Thorpe Grange Farm. 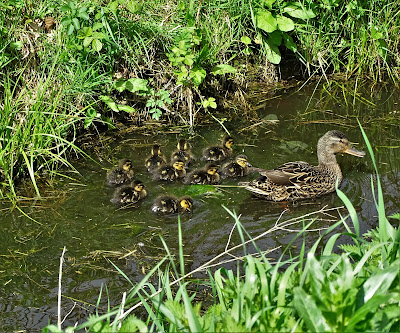 However, when I got there I discovered that both crossing points had been officially rescinded and the gates were padlocked. Sugar! What was I to do? Retracing my steps would add four miles to my ramble. Instead, I found a place where I could climb over the fencing onto the railway track and then clamber over the other side to get onto the old farm track I had planned to follow.

The weather was delightful yesterday afternoon and it was uplifting to see this unknown area emerging from my ordnance survey map into interesting and visible reality. I was quite weary when Clint welcomed me back into the driver's seat before taking me homewards via the M18 motorway.
- April 27, 2018