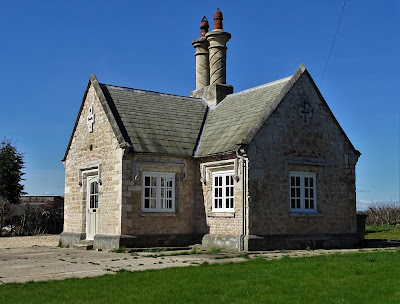 Thursday was a lovely blue sky day. Clint took me and her ladyship east of Sheffield and across the border into Nottinghamshire. In the village of Carlton-in-Lindrick, we headed west towards Wallingwells. We parked up at the point where the tarmac road turns into a track and donned our walking boots.

Immediately, I spotted an eye-catching old lodge house that must have once guarded the entrance to the Wallingwells Hall estate. We walked on and followed one muddy path after another.  I am sure that life can present us with far worse things but squelching along muddy paths is not the most pleasing human activity.
At one point, Shirley clicked me on her phone. It was a bloody awful path, made worse by horses. We clung to the edges of the so-called path and occasionally. our boots were gripped by the ankle-deep mud. A "Schloop!"  sound was emitted when we managed to pry our boots out of the quagmire.

Effectively we were circling the woodland that encloses Wallingwells Hall and the remains of Wallingwells Castle with its ruinous gardens. Having finished our orbit we were none the wiser. It all remains a woodland mystery. 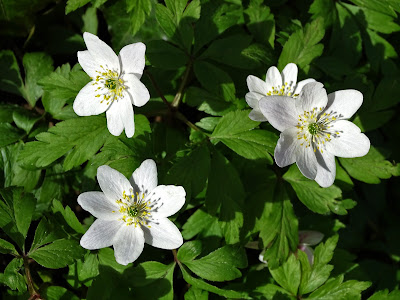 Returning to Clint with our now entirely brown boots we saw wood anemones like fallen stars by the paths in Wallingwells Woods. Hungry and thirsty, we soon headed to the humble cafe at Langold Country Park like soldiers returning from the trenches. But it was still a lovely day out with the signs of springtime bursting everywhere in the bright sunshine.