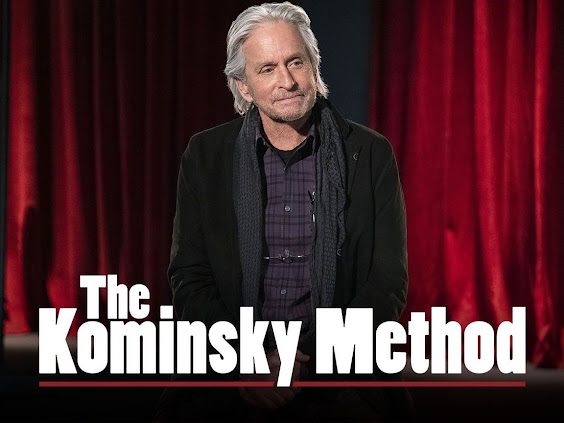 Last night I finished watching "The Kominsky Method" courtesy of Netflix. It consists of twenty two half hour episodes. I  saw all of them in seven days. The series was recommended to me by my friend Mike.

It chiefly revolves around a Los Angeles stage school where has-been actor Sandy Kominsky puts his coaching "method" into practice. He is played by Michael Douglas who is not an actor I had previously registered much interest in. He kind of passed me by.

"The Kominsky Method" is very nicely produced and it is imbued with quirky often subtle humour. The writing is solid and intelligent and there is a  laid back quality to the entire tapestry.

There's a refreshing and total  absence of guns, killings and screeching car chases. Instead the drama focuses upon relationships, ambitions, failures and the differences between people. Michael Douglas is a revelation - playing his part with dry self-deprecation and humanity.

The well-known film criticism website "Rotten Tomatoes" said this of the show: "Full of humor and heart, The Kominsky Method paints a surprisingly poignant  portrait of life and aging, elevated by two top-notch performances by acting legends Alan Arkin and Michael Douglas.."

Of course people's tastes differ  but I very much enjoyed "The Kominsky Method". It filled eleven hours of my life very happily. Perhaps you have already seen it but if you haven't and you have access to "Netflix", I suggest that you give it a try some time.