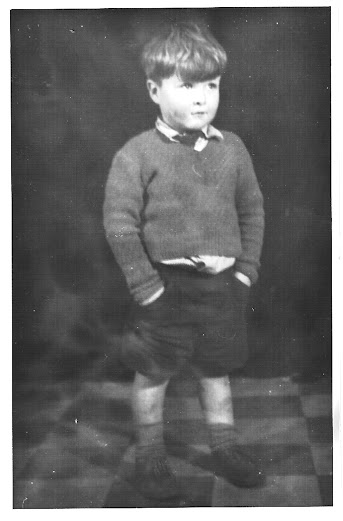 That's me that is. I must have been four years old, heading for five. I was a scruffy little monkey wasn't I? There I am with my hands thrust in my pockets, knees scuffed, socks down, shirt bulging out from an old hand-knitted jumper that I probably inherited from one of my older brothers. I am sure that my father would have taken that picture. He probably called me in from our garden or from the fields in front of our house. I don't look too happy about it.
My brothers and I enjoyed a lot of freedom from an early age. We'd be roaming round our village or down the canal or cycling to local farms or playing football up at the recreation ground. The world was, if not our oyster then our Yorkshire pudding. Like other parents in our village, ours seemed quite unconcerned about our safety. That was the way of things back then. Back doors were never locked and children were trusted to come home at teatime.
It was all very different for my two children. By the 1980's paedophilia had been invented and lurid stories in newspapers made it clear that life for children was now fraught with danger. They got knocked over by speeding cars or contracted deadly diseases or were targeted by kidnappers. Parents had to be protective and doors had to be locked. Society had slithered into a very different, far less carefree way of life. We could never go back.
But I remember making caves in haystacks, "borrowing" old rowing boats, building a den in Colonel Wood's wood, scrumping apples from Mrs Varley's trees, racing caterpillars, picking potatoes and peas for money, climbing horse chestnut trees to  reach the biggest conkers and sharing tall stories with our peers. Yes - that once was me: that little  ragamuffin in the photograph who became the man I am.
- October 05, 2021